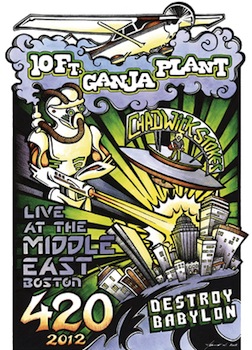 10 Ft. Ganja Plant have announced a rare show announcement and no better date to play the event than 4.20.2012 in Boston, MA. For those lucky enough to catch the show be sure to grab tickets sooner than later cause they will no doubt go fast. See below for more from the band about the show and ticket details. You can also be excited to know the band announced a new album is set for release on April 24th titled "10 Deadly Shots Vol. II".

Elusive reggae band 10 Ft. Ganja Plant will play the third ever live show in their 12 year history this April at the Middle East in Boston.

Joining them for this historic event are Chadwick Stokes (of Dispatch and State Radio) with a solo acoustic set, and Boston's punky reggae upstarts Destroy Babylon.

Tickets are now on sale at the Middle East box office and at Ticketweb.
10 Ft. Ganja Plant will be releasing a new album "10 Deadly Shots Vol. II" on April 24.