Get To Know "Ekolu Kalama" 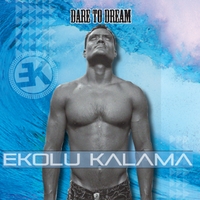 By the grace of God, Ekolu Kalama humbly admits that he is merely a product of his environment. Born into Hawaiian waterman royalty, Kalama is proud to be carrying on the championship tradition. In 2009 Kalama won the World Cup of Stand-Up Paddle racing, held in Hamburg, Germany, claiming victories in both the 2000 meter sprint and 10,000 meter distance races. One month later, on his home turf, Kalama claimed his first solo win across the Kaiwi Channel (32 miles), in record time, which is considered to be the “Super Bowl” of stand-up paddle racing.

Never satisfied with maintaining the status quot, Kalama has since evolved from a sponsored “team rider” to now a “team owner” and will soon be in the position of sponsoring riders under his surf and lifestyle brand simply named, “EK”. Kalama is thankful for the generosity of his mentor and friend, Laird Hamilton, big wave and stand-up paddling pioneer, who gave him his first board and paddle, enabling Kalama to live the first half of the dream, providing for his family while doing what he loves.

With the release of his debut album, “Dare To Dream,” Kalama begins to realize the second half of his dream, which began 5 years ago, when he left the security of his county fire fighter position to pursue the life he's always wanted; becoming the boss, surfing and playing music full time. Kalama hopes to inspire listeners to pursue their passions in life as he sites, “If I can do it, a small-town boy from Moloka'i, anybody can do it.”

“Dare To Dream” features 12 original tracks, all written by Kalama, covering a range of musical genres from Pop to Reggae. Kalama intends to take the show on the road, following the world tour of stand-up paddle surfing and racing in countries such as France, Spain, Brazil, Tahiti, Fiji, Japan, Australia, Peru, El Salvador, Mexico and many more. Kalama's ultimate goal is to bring Hawaiian culture to the rest of the world and share the “Aloha Spirit” with as many who are willing to receive. The variety of flavors and subject matters conveyed in Kalama's music is a direct result of being raised in Hawaii, the “melting pot” of the world, and is sure to appeal to listeners from all walks of life.

In closing Ekolu would like to encourage all of us to reach for the stars and to dream big dreams. “If you believe in God and that his Word is true...that HE has a plan to prosper you, not to harm you, to give you a future and a hope, and that through HIM you can do ALL things..., then why don't you dare to dream?”