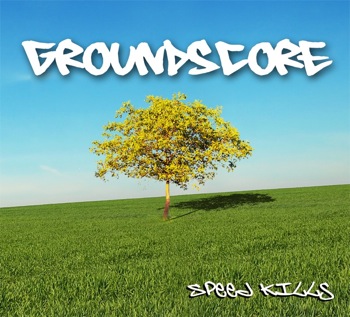 Any band coming out of DC has to be made of stern stuff, but GroundScore have no problem living up to that. Their live shows have already attracted strong support on the East Coast and they are rumoured to be epic.

DC’s GroundScore release their second album, Speed Kills, on May 22, following on from their debut album "Healthy Children".

The three-piece rip into the opening track of the album, I’m Always in Some Shit’, as if they are paying homage to their DC roots and the hard-core scene for which it is so well known. But don’t expect this to be an album of straight-up noise because GroundScore also know the way to their melodic side, in part thanks to the gentle vocals of Zach Bellas but also the restrained drumming of Chase Lapp.

‘I’m Always in Some Shit’ starts how one would expect a song at the end of an epic three-hour show to finish, a haze of fading guitars and freestyle drumming. It is clear from the beginning GroundScore like to mix things up, the thrash guitar of DC hard-core and the chilled out vibe of sweet sinsemilla.

Title track ‘Speed Kills’ is a throwback - a throwback to the days of early 90s punk, something akin to Green Day before they went all stadium rock on our asses.

GroundScore slow it down for a few songs in the middle portion of the album, I can say middle portion because Speed Kills is a whopping 17 tracks. The slower-paced tunes showcase the GroundScore’s musical abilities. The instrumental ‘Candy from Strangers’ – great name for a song by the way – is reminiscent of America Football (the post hard-core melodic emo band, not the game played by jacked up steroid freaks).

Listeners of Speed Kills are even treated to a ten minute plus track with the incomprehensible yet alone unpronounceable ‘EROGSCHTULC’ – anyone out there know what this means? I say treated because, name aside, we are treated to a track of epic portions, further showcasing the boys’ musical skills and Bellas’ strong vocals.

Coming in at over an hour, the 17-track Speed Kills is album which properly mixes it up, exploding into life before slowing down, a rock album with a hint of reggae, an album that is unlike many you have heard before.