There was a problem rendering your image gallery. Please make sure that the folder you are using in the Simple Image Gallery plugin tags exists and contains valid image files. The plugin could not locate the folder: images/indubious_sanfran
Monday, 04 June 2012 16:09 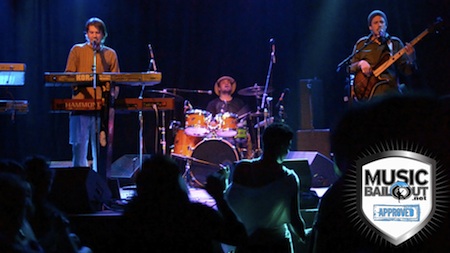 Oregon’s budding reggae scene is still in it’s early stages, but psycadelic reggae funk pioneers, Indubious, have quickly risen to the top. Not only are they making a name for themselves, the 3 piece powerhouse is also blazing a path for future bands coming out of the area. I got a chance to catch up with Spencer “Skip Wicked” Burton, Evan “Evton B” Burton, and Matthew T. Wells, the Intergalactic Reggae Revolutionaries that are Indubious, before their show with Rootz Underground at The Independent in San Francisco.

Thanks a lot for having out to the show, the first thing that strikes me about your group is the name, how did you guys come up with it?

Evan: Well, Indubious means undoubtful, sure of oneself.  There’s a history to our work, our story more than just the music.  Both my brother (Skip, bass/vocals) and I were born with cystic fibrosis and were given a pretty grim diagnosis.  So, we really became friends with our own mortality through dealing with that.   We realized early on that only here for a short time, so if we’re gonna do something we’re gonna be damn sure it’s worth our time .  Our motto is to “Live Indubiously”, to live without doubt and without fear.

How does your name reflect your music and the sound that you have?  I noticed you have a very open minded approach and draw from a lot of influences.

Skip: Being authentic is really important to us, especially when you’re trying to get into particular scenes.  There’s certain stigmas when you’re playing reggae music in the US, especially being Caucasian there’s expectations about how we’re ‘supposed’ to sound but we strive to break those molds.  We all come from our own influences and we try to reflect that.  You can’t make music you don’t live.

Matt: For me, it’s not about trying to play a specific kind of music or style, it’s just playing music, plain and simple.  We play what we feel and what moves us, what you hear is us!  We like to think of things in unobvious ways.

Evan: We’re predictably unpredictable (laughs all around)!  But honestly, we try to break down boundaries in music.  We happen to fit into the reggae scene, it’s how a lot of people categorize us and that’s perfectly fine, but we fit a lot of other influences into our sound.

How long have you known each other?

Skip: Yeah there’s definitely a bit of a I-5 scene up north, lots of bands coming up, so we met up with Matt and the rest is history.

Skip: The road kinda makes you realize how little you need to survive.  It makes you remember that you have this big box with all this stuff and you think need all of it, but then you go on the road and you consolidate all your life into a bag and it sucks at first but then you realize you didn’t need all that stuff.  You also need to deal with all the people around you in very close quarters, you can’t always just go retreat into your box and not talk to anyone.  It’s kind of a microcosm of how we think life should be in a way, because you have to deal with people, and your self and the fact that stuff isn’t that important.  Also you have deal with knowing you’re doing something that’s not about you.  A lot of people think being on the road is glamorous but it’s a sacrifice that we do for the good that is music.

Evan: It’s crazy going to places where you’ve never been before and you meet these amazing people that love our music  and are so supportive.  People come up and say things like “Your music has changed my life”  and we think “Well, you’re changing my life right now!”.

There’s a really good scene right now where we play in Oregon, we have a large fan base there.  We’re sort of in the middle of a social revolution there.  People are waking up from the fog of Walmart and consumerism of America and coming into the understanding that we are all connected.  This has created a huge music scene that people are so enthusiastic about and it’s not clique-y, it’s not ‘this’ kind of scene or ‘that’ kind of scene.  All kinds of people come out to our shows, old people ,young people, hippies, straight-edge, people from all kinds of races and backgrounds, it’s beautiful..

That’s awesome, we’ll have to come up there soon to check it out!  Anything else you’d like your fans to know?

Skip: You are infinite and you are beautiful!

Wise words of positivity from musicians who have overcome a lot to get where they are.  We had an excellent time hanging out with the trio, sharing some laughs and tangents that went deep into why we’re here, why we should enjoy life and love one another.  Matt and I got into a conversation about words and their power and he said this to me, “You know, when you think about it, you have to put letters together to spell a word, so your words are spells, and when you put them into a sentence and give that to someone, you are sentencing them with your spells!”

Indubious certainly put the audience into a trance-like state with their audio wizardry, starting with a Flea worthy slap bass line from Skip, followed by a tight reggae groove on their song, “Sweep With The Broom”.  For only being a three piece consisting of Evan on keys, Skip on Bass, and Matt on drums, the group creates a big sound on stage.  If I had been blind folded when walking into the venue, I would have thought there was at least a five piece on stage.  The brothers Evan and Skip keep things dynamic by switching off on lead vocals while also backing each other up on harmonies, hitting lines with precision that only a pair singing together for literally their entire lives could pull off while also nailing their respective instrument parts.  Indubious has a deep understanding of each other, their music, and the world around them.  Maybe this comes from the fact that they live by their motto, to live without fear and do what you love, “To Live Indubiously.”