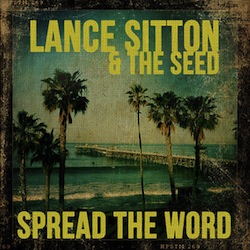 The midwest group The Seeds, accompanied by frontman Lance Sitton, released there first full length album titled, Spread the Word. The album cover looks like a canvas painting of a beach with palm trees and a dock. Giving it that warm, summer kind of feel to it, just in time for the season.

The first track, titled, "Good Love" opens up the album. With powerful bass lines, great harmonies and lyrics that send a message, this song starts the album with some great vibes. Accompanied by SkillinJah and Josh Heinrichs, Lance and them produce harmonies that will make you crave more. "Everythings gonna be just fine," the constant reassurance that Lance sings to his girl, and Love, are the main messages of "Good Love."

"I was a fan of Lance Sitton & The Seed already as they are my backing band. I'm also a huge fan of Lance's side project 'To the Sensi Tree' & suggested that he should try doing a more rootsy style album similar to the Sensi Tree & he said that we should do it together. I had just finished working on SkillinJah's second album ' Reality' and the timing was perfect for something new. -Josh Heinrichs

Once "Good Love" ends "I Feel The Joy You Bring" begins. Again this song has a powerful bass line, but to even that out are the soft keys of a keyboard that come in during the chorus. This gives the song that "island feeling" to it. Along with the keys are added percussion instruments. The steady rhythm of the bongos and congas keep the chorus mellow, but make you want to dance.

As the album continues every song is just as good as the first. All of them have unique and positive lyrics, such as, "Love is my religion, my way of life and it cause no friction," from the third track "Love," featuring Josh Heinrichs. In this song Josh's vocals compliment Lance's as they sing through the chorus. Mid way through, a guitar solo breaks out and fits itself perfectly within the song. Adding an awesome blend of fret work and even a harmonica, this killer track instantly became my favorite.

Lance came by my house & introduced Kyle (SkillinJah) & I some of his new tracks & we put "Good Love" together that day. It's always a blast working with these guys, they are already some of my best friends & amazing musicians. It's great to see "Spread the Word" debut at #14 on iTunes yesterday & #8 today on Amazon. Proud of my homies & glad people are digging the music." -Josh Heinrichs

"Roll Wit It," a chill song about "rolling one up" and "floating away with the music." This track gives the album a slight upbeat along with an acoustic solo to finish up this ganja loving piece. As "Roll Wit It" fades away, "Party at My Friends" takes control with a stellar guitar riff that doesn't stop throughout the song. Lance has Tom Gibson join him and lay down a few lyrics that make this song another original for both artists. The following track, titled, "Under the Sun," continues to give this album the constant island feeling that you get from it, along with a very nice guitar solo with the wahwah pedal distortion.

As the album begins to wind down, the three minute track "Everyday" starts and ends quickly, leaving you wanting more of the juicy chorus. "An Apple a Day" is the interlude of the album. This song is different from the others with its really fast beat, harsh guitar, solid drums and an insane trumpet solo. It definitely keeps up the Reggae style, but adds a little Ska into it. The final two songs consist of "Good Love" (Acoustic), which only features SkilinJah, and the final cut, "Listen Friends." This song wraps up the album in a perfect way. Lance is accompanied by Cas Haley, and creates these beautiful harmonies that they have both perfected. Even though the song is slow and played on one guitar it still ends this great album with a great message. "Music rids the pain." These are the words that Lance & The Seeds leave us with.

"Spread the Word" is a huge hit in my opinion. Every song is completely unique, and the guest appearances make it even better. Just in time for the summer Lance & the Seeds have put together a masterpiece of good lovin', sunshine, happiness and all around irie vibes. From the cover to the last song, this album is great in every which way. If you haven't already, go pick this album up now! Available now on iTunes and Amazon.

Lance Sitton and The Seed Links