Get To Know "Makeshift Innocence" 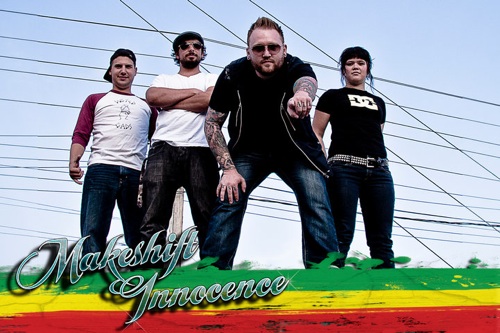 Makeshift Innocence has a unique mystique, which is defined by combining a variety of genres including; Rock, Reggae, Pop and Roots. Makeshift Innocence was originally formed in 2007 by Jesse-James Cameron and Benjamin Bald. Not long after forming, they released their first album "Between Heaven and Hell" with outstanding success and the band was quickly booked into venues across Canada.

Lead singer Jesse-James Cameron spent four years living in Negril, Jamaica as a child. It was there he fell in love with the tones and feel of Reggae music. Trying adding additional members. Bassist Tammy Amstutz and drummer Dylan Lichtenberger were selected among many to enhance the sound of the band. Since, all members have combined to diversify and strengthen the team. These additions also lead to the release of their hit new single "Your Body" to even more critical acclaim.

Makeshift Innocence set out on a 2009 Canada-wide summer tour that extended from Vancouver Island to Montreal, and found themselves well received by fans and new listeners alike, continuing to build their fan base. Remaining completely independent and self-promoted, the group also managed to find time to return to Calgary mid-tour to perform alongside legendary Ben E. King (Stand by Me). While on tour, their new single "Your Body" along with "Tides" was chosen to be in a feature film (shot in Los Angeles) called "the Anniversary". While being featured in a movie was amazing, "Your Body" was also propelling them to the top of the Myspace charts in their genres. Makeshift Innocence hit #1 in Folk Rock, #2 in Reggae and #6 in acoustic and has been steadily increasing those numbers for over the past 6 months.

The innovative sounds exemplify Makeshift Innocence's compilation of rare talents from across the country and globe. The music attracts those of all ages, which is as clear as this cohesive unit plays flawlessly in front of teenagers and elders alike. With momentum rapidly picking up pace, and a 2nd album being recorded as we speak, it's a sure bet you can expect to hear and see more from these guys in the near future.