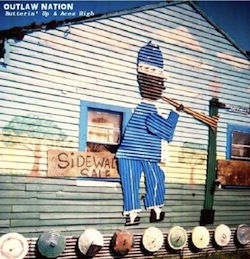 Outlaw Nation have set the date to their next release "Butterin' Up & Aces High" for May 1, 2012 on Selfish DIY Records based out of New Orleans, LA. This being the bands eighth release you can expect a change up from their usual Reggae Rock vibes to a more Blues-Funk style. The band says "We went back to our New Orleans Roots and it is full of Blues and Funk and we touched on our other influences like Hendrix and Cream". The band has brought original freshness to all their other releases and this next album will surely bring the flavor.

Sooooooo...here's the cover and the track listing for the new album. Dig all that and I promise you we'll be right back real soon with more cool stuff (like when we're coming to see YOU!)

OUTLAW NATION will be releasing the first single from their 8th record on March 5th, 2012. The new record will be released on May 1st , 2012 on Selfish DIY Records a New Orleans, LA based label.