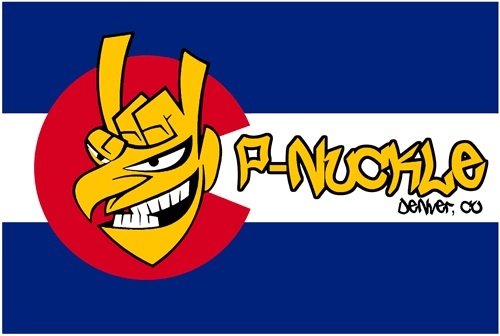 For the underage kids who don't know the meaning behind the name P-Nuckle, could you explain to them what its all about?

Well P-Nuckle originated from a few different meanings. But we really wanted to have a band name that encompassed our fans. We like that Grateful Dead fans were called Dead Heads - So when we came up with all the different things P-Nuckle could mean, we thought calling our fans Nuckleheads would be a perfect fit, so P-Nuckle stuck.

P-Nuckle has one of the freshest logos ever. Who came up with it and does the face have a name?
A guy by the name of Trevor Van Meter created characters called Nuckleheads for a tv pilot he did back in the 90's - our logo's name is actually Muah Ha Ha.

It has been awhile for this new release to come out. What have you guys been up to and why the long delay for the much anticipated album "Stand Up "?
We had a long delay in getting this album out because we all started settling down - We also went through a lot of changes as a band and in the end it came down to being happy with the end result. We probably scratched a half dozen or so songs before staying with what ended up on "Stand Up".

Why the switch from the title "Stand Up and Bitch" to just "Stand Up"?
We tried to really stay away from the Parental advisory sticker - But our boy Ded Res - drops the f bomb in a rap in No Justice so we had to have one. It was kind of a Marketing decision at the end of the day. 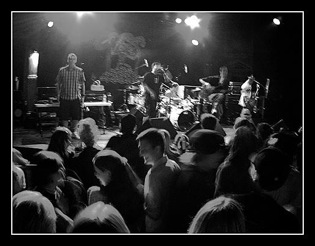 Was there anything changed up in the recording process this time around? I felt the sound quality was awesome on this effort.
Dave really grew as a Producer on this album, I think he did an amazing job with the limited equipment he had.

What would you like fans to gain from listening to "Stand Up"? Is there a certain message you want heard from this album? If so, what is it?
We never intended the album to have a particular message but our band's message has always been Stay positive, Fight Back and don't let them bring you down.

There are a few political voice sound bites heard throughout the album. Why were these particular quotes chosen?
Really because George Bush floored us as a politician and there will never be another person in the history of the Presidency of the United States that will give such great dumbass sound bytes.

It really is refreshing to hear such great meaning behind lyrics, and the song "No Justice" does just that. For those who have not heard it yet, can you explain the meaning behind this song?
We see the world as a ticking timebomb. People aren't going to stay quiet anymore , we're connected through copper and fiber now as a world community. The Stage is set for a world audience and people are listening. We have always tried to stay observant of what is happening around us and found that a lot of our fans are too.

Last year the video for "A Place Called Home" came out prior to the release of the new album. Now that "Stand Up" officially dropped, are there any plans for another video?
We hope to release a video for Love To Love Her at some point in 2010.

P-Nuckle has been in the scene for about 10 years. What is your opinion on the Reggae Rock community of today compared to when you first got involved? Why do you think this genre as a whole is gaining popularity?
I think the genre has always had a solid backing and great sound. It just took a while for the popular media to catch up - The Silverback Crew is the reason anyone knows about this Genre and the success of their Roster is proof to that. I think that after 10 years in this game watching Stoopid go from playing for 20 people to selling out Red rocks is a testament to their business model.

As of late, some really good artists are coming out of Colorado. Who in particular would you choose to tour with from there, and are there any plans for a national tour?
We really like a lot of Colorado Bands - to name a few

What do the guys from P-Nuckle do on their time off?
We all like to Wake board in the Summer and Snow Board in the winter - We all play in other projects around town and unfortunately all of us have day jobs.

What does 2010 have in store for you guys?
We hope a National Tour and the Release of another album.