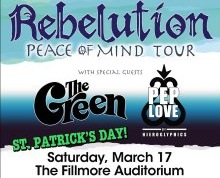 - Rebelution, The Green and Pep Love
Official Rebelution After Party at Cervantes “The Other Side”
- Fortunate Youth and Pep Love
Review By Jeff Possiel

The Peace of Mind Tour came Irish strolling through Denver on Saturday, March 17th to celebrate Love, Acceptance, Progress, Peace and oh yeah, St. Patrick’s Day. Streets before the show were filled with green get-ups, spray dyed hair, Carlsbad jerseys and all the shamrocks you can imagine. The two block long line to enter the show expressed the most fantastic Irish Reggae blend you’ve ever seen. After waiting on that line for a few minutes, I was able to enter through the Qdoba Express door, apparently it wasn’t too sneaky because I spoke to a security guard at the door and all he did was wrap a blue wristband around the many others clinging to my right hand from the previous 4 nights of shows. "The laser lights were a show themselves as Rebelution faded in and out of dub tones and electric jams elevating with the presence of the crowd throughout."As I entered, The Fillmore opened up to a beautiful long theater-like room with six shiny chandeliers hanging above the floor with well-positioned bars, bathrooms and merchandise area. Stretched from the right side of the stage to the merchandise area toward the back of the room, the red wall is filled with an eclectic array of past performing artist photographs. My favorite two are of Bob Dylan playing with Paul Simon, and one excellent photo of Gwen Stefani being the gem she is. Although most are mesmerizing, those just happen to be a couple of my personal loves I can still see vividly in my mind. Anyway, on to the show!

I hadn’t had the chance to see/listen to Pep Love prior to the show but the fact Rebelution had them on the nationwide bill is beyond enough proof to know they would come with the goods. Pep Love with DJ Mere came out strong! Killer conscious rhymes with congruent beats hit hard and forced the growing crowd to interact. “Pacific Heights” is a personal favorite and available to listen to on their Facebook page. I encourage you to listen to that free track streaming, then proceed to purchase their newest album just released with Hiero Imperium records. While in a head bopping groove the audiences mind was forced to open to the realness of life, the option to change and make a positive impact in the world was made known. I personally enjoyed the commentary spit between songs when Pep Love expressed that their music is, “an example of the pure, the raw, the uncut and real” which expressed his passion for having real influence for change. The audience was receptive with cheers and with growing numbers. By the time Pep Love ended their opening set The Fillmore was alive.

The Green hopped on stage after a minor set change and absolutely blew the crowd up. The last time I saw The Green play was over a year ago, if I was impressed then (I was), than this time I was blown away. In my opinion, this was the best set of the night. Their harmonious grooves filled the unsuspecting crowd with meaning and joyous care for the soulful sounds. Genres evaporate as The Green faded from Hawaiian rhythms to punk rock rage really firing up the crowd. The Fortunate Youth boys were in the audience going off supporting their friends and were just as impressed as the rest of the crowd by how tight The Green grooved. While walking around The Fillmore before the show, most of the young crowd I polled was unaware of who The Green was but by the time this show ended, I’m sure t-shirts, “The Fuckin’ Green” and “Kiss Me I’m Irie” with a pot leaf rather than a shamrock had to be sold out. I believe Denver may have created a special relationship with The Green and when they come around on their own headlining tour soon, the Colorado crowd will be welcoming with love and smoke in the air.

By the time Rebelution took the stage, the crowd was ready to rock. With the highly anticipated album release, “Peace of Mind” dropping a few months’ earlier, strategic social media planning by Controlled Substance Sound Labs set up each show to be alive with fans. Through Twitter replies, Facebook contests, weekly newsletters and more, if you’re a true fan, than you’re informed by CSS and Rebelution who make it a priority to engage with their fans… This is why the crowd was wrapped around the venue two blocks deep and the show ended up being sold out. As the floor space filled and layers of people lined against the side walls for an overhead view, along with friends Fortunate Youth and Mike Pinto in the crowd, Rebelution opened and finished strong. The laser lights were a show themselves as Rebelution faded in and out of dub tones and electric jams elevating with the presence of the crowd throughout. We all know Rebelution is established and influential, I think it’s time that we all start allowing that influence to change the track in our Itunes and the song on our Cd player to listen to something new. Pay more attention to those bands they have open for them, support and encourage local, opening acts to play more, sing their song and be heard. I don’t think the average fan appreciates an artists integrity and passion nearly as much as they should… I don’t think I do all I can however I do try. Remember that once upon a time, Rebelution was an opener.

Please, go see an open mic in your town. Tell a writer, a singer, songwriter, any artist that you appreciate what they do because it is a painstaking task to dilute the distractions in the world and take ahold of your true intentions in life. See live music… Purchase a piece of art. Buy an album…Comment on a post… Retweet a twit… Roll a joint a drop and drop the donation box at a show. Whatever you can do, it is appreciated by a true artist.

The whole night was pretty wacky as the St. Patrick’s Day celebrations raged on in colored costumes, The Green played and the undertone of the use of “green” of other means filtered throughout. From the end of that show, brought beginnings to another… The “Official After Party” for the Rebelution show took place across town at Cervantes “The Other Side”, where Fortunate Youth turned from fans watching to artists on stage. These are guys that genuinely appreciate your support, whether it’s baking them a cake or showing face at an event – Fortunate Youth knows you. This band, once again is on the grind, putting in the real work necessary in order to really make an impact. Opening up for nationwide acts The Expendables and Tribal Seeds, on the road from California, Fortunate Youth lights up stages with incredible vocals from Dan Kelly, backed by impressive instrumentals from multi-talented musicians Corey, Greg, Jered and Travi. While those guys rotate instruments during the show, Jordan holds it down from the Evolve stickered drum kit and guides the groove from the back of the stage. This was my third night in a row seeing Fortunate Youth do their thing and really, I laugh throughout the show because it’s undeniable that they will be a real force in the scene in the future. I know that they will be a leader in the coming years, expanding reggae-rock beyond clubs and theaters to the main stage. People know there are issues in the world, with catchy tunes, meaningful lyrics and real talent, the stage presence by Fortunate Youth can make a difference.  I believe this group of guys with how they present themselves on an off the stage can make a true impact on fans, which will hopefully translate to real change in the listeners lives. Please share the music you love with another. Post a video online, tweet the musician, burn a CD and any by any means, spread what you believe!

Many thanks, be well,