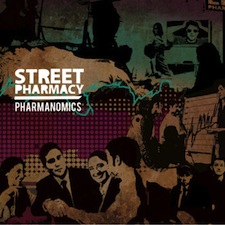 Welland natives Street Pharmacy have seen a cult following grow from their keep-it-independent mindset. After multiple releases, national TV appearances, and a range of approaches, Street Pharmacy has kicked off the new year with a new full-length album. Pharmanomics continues the reggae-rock revival with the hip-hop twists fans are used to hearing from frontman and band mastermind Ryan Guay.

Guay has shown a deep empathetic ability to channel specific moods and mentalities into consistent themes. In other words, he has the intangible ability to channel his intended feelings to the listener – and this band will do whatever it takes to accomplish that, even if it means flying to Cuba to capture authentic island rhythms for the album The Legacy of Rudy. An intimate acoustic experience is felt on Wood and Strings and Back When Things Were Honest… The band has even shown their ability to compete in the alt-rock scene with their Divorce effort.

Pharmanomics continues to play on the familiar style of Alimony and, of course, the Pharmanomics EP – a sound put in demand by the groups breakthrough album Free Delivery. The first track “To My High School Friends” is a bittersweet song about forgetting those people that just suck. Whether you caught them cheating, they framed you, or they were just never there for you, sometimes it can be fun to look back and see how insignificant these people are in the course of our lives.

“Settled Down” brings a bouncy rhythm with some nice party-ready drops. The song copes with the scenario of a close friend losing their significant other. “The Code” is a standout on the album bringing a dubby hip-hop flavor to the table. The subject matter refreshingly provides a more somber, serious approach while keeping an extremely simple and catchy hook. “The Code” provides the perfect balance of Street Pharmacy’s tonal aspects.

“Student Ghetto Fantasy” returns from the EP providing playful word play, beautiful harmonies, and a nice drum and bass breakdown. Old Time Beat is a big time hip-hop collaboration that rivals the Dirty Heads. On the track is Gianni Luminati and Sarah Blackwood of Walk Off the Earth, KrNfx, Ian Blackwood, Wolf Saga, and Donny Yonder.

“Trailer Parks” speaks of a rough relationship with a parasitic partner. The chorus is an anthem for moving on. It is also, in a sense, a song about Guay’s strong infinite relationship with music. “Red Light Midnight” returns from the EP just as great as it was before. “Twenty Young” is a song with its target audience in the title. A pure party song, “Twenty Young” is one that may be enjoyable to bring your energy level up every now and then, but the superficial lyrics and poppy drums make it a song probably better suited for live performances.

“Lying Next to You” takes things down a notch and provides a nice groove with pleasantly spacey production effects. This slow romantic song is a perfect addition to your Date Night playlists. “The Morning Song” keeps the romantic heart beating with a country and folky twang added to the mix. Beautiful female harmonies complement Guay’s vocals wonderfully and add to the romance. “Waterslide” is a great hip-hop collaboration with Will Marr of illScarlett and John Doherty of Trouble & Daughter. “Waterslide” along with “Rendered” return from the EP to close off the full-length.

Pharmanomics explores the full spectrum of Street Pharmacy from joking pop songs, to serious folk and hip-hop, the Pharmacy manages to incorporate many musical genres within the framework of their reggae-rock appeal. Pharmanomics is bound to keep any fan of the band happy. If you are a newcomer to the band, Pharmanomics brings forth a great representation of the group. Combine this with their independent spirit and one of the more interactive social media presences, and you’ve got no reason not to support this group.