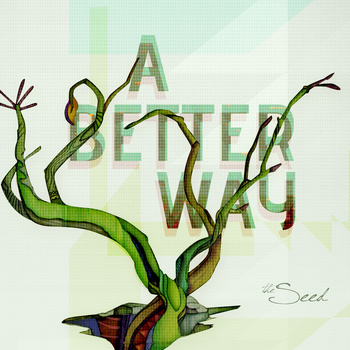 In early May, The Seed released their second full length album titled “A Better Way” under the record label Beard and Pen Records.  Coming out of Springfield Missouri, the hard working reggae band has played over 300 shows since early 2008.  The trio is known for their dynamic live shows and their sweet melodies, which they worked into their new album pretty well.  I found their sound to be similar to that of Katchafire, with mellow rhythms and smooth lyricism.  Playing most of their upcoming shows locally in Springfield, it is disappointing that they don’t have a wider range of tour dates.  If, like me, you are unable to see them live, their new album “A Better Way” more than makes up for it.

The album opens up with “Head-Band,” an easy going track which strongly incorporates horns at the both at the beginning of the song and periodically throughout.  Followed by “New Things,” The Seed picked up the pace a little bit here.  Even with the accelerated tempo, they were still able to use horns at times, which I think was a great addition.  They also used bongos at one point towards the end, which I have not heard in many reggae songs recently.  After “New Things” speeds you up, the next song “Just Live” slows you right back down again, which is one of the elements I liked most about this album.  In the reggae scene today, too many bands use the same tempo and sound in all their songs.  The Seed, however, was able to break the mold.  My favorite track of the album came towards the end in “Little Bird.” Opening with guitar as the lone instrument, others slowly make appearances as the song progresses.  It is one of the more mellow tracks on the album, one that helps you unwind after a long day.  If you are in the market for a fresh new reggae album, look no further.

“A Better Way” is definitely a great album, straying away from the rut of sameness that too many bands have fallen victim to.  It is really mellow and relaxing; perfect to listen to when you need to just get away for a while.  Unfortunately, they are not touring a wide range of venues, but the CD will do for now.  If you’re a fan of reggae, you should definitely give this album a listen.

http://www.theseednow.com
Tagged under
Login to post comments
back to top