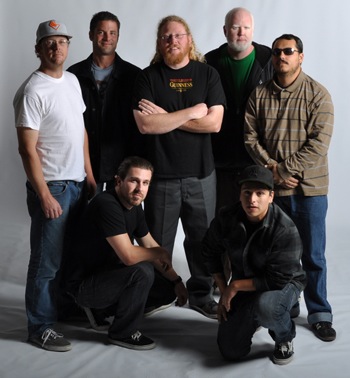 From The Simpkin Project:

The Simpkin Project will release their third album, "Everything You Want," on Tuesday, August 9. The album release party follows on August 12 at Tiki Bar in Costa Mesa, CA. Listen to a brand new track on the band's Facebook.

"Everything You Want" is The Simpkin Project's most accomplished release yet. The 14-track album's roots reggae foundation incorporates elements of Americana, rock, pop, and dub. "This album is a huge progression for us as musicians and in terms of the recording quality and songwriting style" says lead vocalist-guitarist Phil Simpkin. "Every member brought something unique to the table, and everyone's ideas were openly expressed and welcomed."

Formed in 2003 in Huntington Beach, CA, The Simpkin Project has crafted a unique reggae style. The seven-piece band has recorded all of their music at HDP Studios, owned and operated by keyboardist Shawn Taylor. Their two previous albums "In The Wake" (2008), and "Walk On Tall" (2007), were recorded there.

The Simpkin Project's sound has been described as "uncompromising...blend[ing] authentic roots rock rhythms with a wall-of-sound production style" and lyrical compositions that "range from the simply truthful to the stirringly anthemic" (Reggae-Reviews.com).

The band's respect for reggae is apparent in their music and personality. As they say on their website "Reggae music is what we were all raised on. What other genre of music exists solely as the vehicle that carries with it messages of peace, positive vibes, respect, love, empowerment, and spiritualism?" Indeed, reggae music is everything you want.