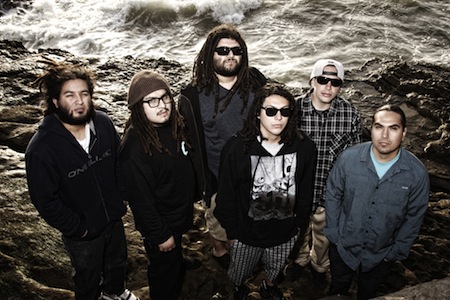 We weren't sure if we were going to catch an interview with Tribal Seeds before their show, but by chance we caught them on their tour bus on our way back to camp. They were super welcoming and available for a pop-up interview. When we climbed up into the tour bus, they were actually editing and mixing music right then and there. It was obvious they have a passion for what they're doing and they've got the right tour bus to spread their music with. It was set up with the works - personal outlets next to each bed; a grill going off even through the rain; and a tight crew that provides a congenial energy. We appreciated their time and passion. You can tell they take a personal responsibility in sharing the thoughts and feelings of so many fans who are upset with inequality and the government. It feels good and fulfilling to share the sentiments with those around you.

You tour so much, do you get homesick?

T-Ray Jacobo: Since 2009-2010 we’ve been on the road and we just go out more and more, but yeah, we get months off. You miss your chick or family at home.

Do you have any time off coming up?

T-Ray Jacobo: We tour until the end of August again, so we have some time off coming up.

Jose Rodriguez: Most of the time we’re just going to be recording music, but we have a couple of weekend shows in California.

Do you write on the road?

Jose Rodriguez: Just look at that right there (Tony on computer), yeah we write on the road.

T-Ray Jacobo: Yeah, I work on the music sometimes on the road.

Your music inspires youth, how important is that to your albums?

Steven Jacobo: (We’re) trying to spread awareness about what’s really going on, not just youth but everyone. We just want people to be aware.

Steven Jacobo: Just the government is a whole mess, I can’t really pinpoint it, the whole thing is just corrupt, you see a lot of documentaries on it. Yeah, it’s why we’re pissed off.

Are there any artists in particular that have inspired you?

Jose Rodriguez: We grew up on Bob Marley.

T-Ray Jacobo: Mostly roots reggae music is our main inspiration and foundation and we draw from other genres a little bit.

Is a DVD of your video from the road in the works?

Jose Rodriguez: No, we just have several minutes of clips.

T-Ray Jacobo: We do want to do a making of the album DVD, so we’ll incorporate some footage from the road and studio sessions.

Any one you are excited to see at Wakarusa?

T-Ray Jacobo: I want to check out Edward Sharpe later.

Jose Rodriguez: Sunday is Iration, but we won’t be here, that would be cool.

Any particular destination you like to play in the most?

Jose Rodriguez: We had fun out in New York this last time.