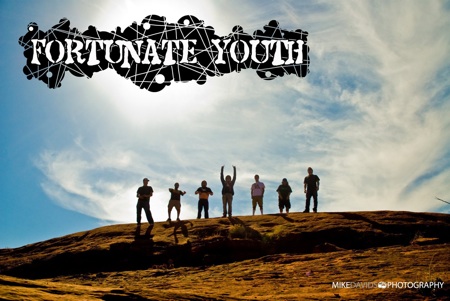 I got to catch up with the boys at their final night of their weekend long CD release shows at Dipiazza’s in Long Beach, California.
Fortunate Youth has been together for two years and they just released their second album- Irie State of Mind

Are there any guest appearances on the album?

"An Irie State of Mind is what we wanted to capture with the rootsy vibe, dub style, throw in a little bit of rap at the end, and just upbeat reggae."Yeah Matthew Liufau of Seedless and his sister Susie. Susie is on the last song- “Bastard”, she wouldn’t say the word “Bastard”, so we had to do the whole thing, and it actually gave the song more power. It was a blessing in disguise, the icing on the cake. It was like, “oh wow we didn’t know that was the secret recipe.” It’s a rap song, she’s just singing and using her voice and throwing it down! Also, Juan from Seedless (on “Farmer”) was actually walking out the door of the studio, but he came back in a just brought his heart and he hit it first take. “Farmer” actually was a song that got cut up so many times and was tweaked left and right, it almost didn’t make it… but Juan killed it and it turned out better than imagined. With this album we knew exactly what we wanted, that’s why it was also so easy to work with our producer, Lewis Richards. He knows

exactly what our language is and we just did it!

How have the fans been reacting to the new album?
They are flabbergasted. It’s crazy; they are so open to it and so eager for it.

Are you surprised?
Yeah, I mean we have fans all over the country and the band is just barely turning 2 years old. Our fans are gearing up for a whole new wave of brand new reggae.

Now, I’m super interesting in hearing about the album art, its amazing! Can you tell me something about that?

It’s so hard to pick album art, because it’s like our new baby. So this time we tried to get a little better. We wanted everyone to have an opinion… Fortunate Youth isn’t about us, it’s about everyone else. So we ended up have a contest and had everyone pitch in and it ended up being Mike D to win the contest. (Check out Mike’s time lapsed video of how he created the album cover at the below video ) He’s so passionate about it, later you will probably see that there are hidden things in the artwork. Mike D does all of our photography too so he’s all over our album. Dan: Also, KC Cowan, from Texas, has amazing artwork. Randomly, we met on Facebook and I told her how I loved her stuff and she already knew us from Hawaii and had us on a mixed CD! KC did the inside booklet cover art.

What do you want people to walk away with after leaving a show or after listening to the album?

An Irie State of Mind. It’s one of those things where you put in a CD and you just play it. And you just forget about whatever you were doing, you get lost. You get to escape from whatever it is. An Irie State of Mind is what we wanted to capture with the rootsy vibe, dub style, throw in a little bit of rap at the end, and just upbeat reggae. And let’s talk shit about the radio! Why can’t we do reggae on the radio?!

Are you guys going on tour?
Yeah, we’re taking off in just a few days for our first heading lining tour. We’re nervous but ready.

How exciting! Just be prepared for ups and downs, and lots of love!
Oh yeah, ya know to go back to your second question, it’s been amazing to see the love from people. We went to Cali Roots festival and everyone knew who we were and we’re so thankful for our new and old fans!

Dont forget to check out the MusicBailout <span style="font-family: 'book an