State Radio drummer Mike Najarian takes some time from his busy schedule to tell us about his new project Ratfynkt and their debut album Populate.

Ratfynkt is the name of the side project you have been involved with for the past few years. Please tell us a little about how the band came about?

"I think there is definitely room for Ratfynkt to remind people of why grunge was so great. In addition to this I think Ratfynkt can offer some new unique twists to the songs stylistically to add to grunge sound..."We got started in about 2003 when I picked up my first acoustic guitar and started to learn to play. A couple months later my friends Steve DiRamio and Chris DeLisle, who I went to high school with, started playing local coffee houses with me near our hometown of Duxbury, Massachusetts. Steve would play hand drums and Chris would play guitar and I would play guitar and sing. Over the next couple of years, Steve transitioned to drum set, Chris transitioned to bass and I made the jump to electric guitar, which I loved because I could finally rip some heavy distortion. Eventually, we started making basement tapes in late 2007 playing the songs that had developed over the previous few years.

At around the same time I was involved with a different band, playing drums, with two friends from my college days, Joe Forte (Lead guitar) and Dom Locapo (Lead singer). We had started playing in 2004 and had been writing as well. When that band lost its bass player, we all merged into one band and named it Ratfynkt. The 5 piece line-up is what you hear on the album Populate, which we started recording in 2009.

Would you say this is more a fun side project or a band that you are serious about and will do more and more with in the future? 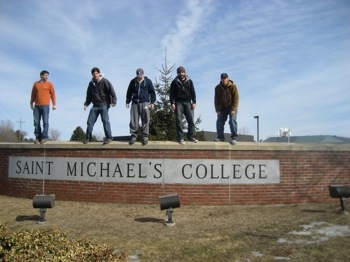 The band has grown more and more serious as time has gone on and as we play more and more, and now have an album to tour behind, we are definitely going to make the leap to try and become a self-sustainable, professionally touring band. The drummer in the band, Steve DiRamio, has toured a bunch with State Radio as drum and guitar tech, and I am obviously no stranger to touring professionally, and I think we have what it takes to be a legitimate force as a national act. It would only make sense at this point to continue to do more and more with the band.

You take on a different role with this band and are the rhythm guitarist and singer. How much of a difference is it creatively making an album outside of drums?
It is a bit different because more than half of Populate was written by me guitar-wise and vocally. That is admittedly quite different than just adding the drum parts. Invariably it is more of a personal expression. However, I think the knowledge I have as a drummer helped me immensely writing songs on the guitar, and conversely the knowledge of playing guitar in a band has helped me incredibly as a drummer. In general, the more pieces of the puzzle that you have experienced, the more you can decipher what is going on at any given moment (and what needs to be done for that matter), and the better player you become. This is not only true in music but is true in life. Knowledge is power I guess, or at least something like that.

Thus, Populate is more my style because I personally wrote the majority of the songs, but structuring the songs, layering the mixes, and working in the studio was heavily influenced by my previous recording experience on drums. Its hard to not learn a ton about successful structures and recording projects when the first professional record you ever cut is with State Radio (Chad is a phenomenal song writer, and Chuck is an incredible player) in England at Real World Studios (Peter Gabriel's world renown studio) with Tchad Blake at the helm producing (Pearl Jam, Phish, Soul Coughing, Sheryl Crow). Talk about being spoiled! What an experience. I'd say I definitely took a lot from that experience creatively and professionally with me into the making of the album Populate. 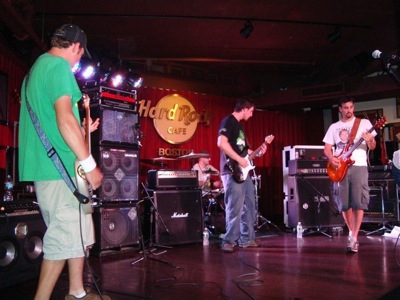 Did the other members of State Radio have any problems with you being involved with a new band or have they always been supportive?

They have always been super supportive of the project and I am extremely grateful for that. It is important to realize that every member of the band is a talented and creative musician, and a close friend, and it is important to help and support your friends in all their creative endeavors. Chad still plays with Dispatch now and again, and has done solo acoustic tours. Chad and his partner Sybil, also have started a non-profit organization through the band called Calling All Crows, which we all support by doing service projects and playing benefit shows (one of which annually has been in my hometown which is always fun). Chuck and his wife Jessica have a cookbook out on the market and also are making a documentary film that Chuck does all the music for. We all support each other in different aspects of our lives too, just like friends should.

Right now the debut album “Populate” is being given away for free download. Would you say this is the new way of trying to expose new bands nowadays?
I think that’s exactly what it is… even Kings of Leon are doing it! With the advent of the internet came a change in the music industry. All of a sudden you didn't need a big name distributor to get your music to someone across the country, you just needed to download a file to your computer. In reality if someone wants a record for free nowadays, they can get it for free. And there's no need to fight it. If people are listening to the music then they might become a fan. And all a band really has is its fans. Being an independent band (and the same goes for State Radio) we rely 100% on our fans to show up for shows and listen to our music. Without the fans a band has nothing: no budget, no music, no touring.

It was amazing to see State Radio grow from a grassroots level. We would go to a city and 20 people might show up... We would try to put on a good show and hope those 20 people told their friends and they showed up the next time around... Maybe 50 would be there the next time, maybe 100 the next, and so on and so forth. We hope to do the same thing with Ratfynkt. You'd be surprised how important you are to a band as a fan, especially a band like State Radio or Ratfynkt. A fan should never underestimate his or her power to help a band succeed, spread the word on the band, or make an influence in the life of the band members. I have met so many great people on the road, and when you are in the middle of traveling the country, living out of a bag, all you really have is the experience and interaction with all the people you meet. And I can say with certainty that State Radio fans and the Ratfynkt fans I have met are some of the most warm, generous, intelligent, real people you will ever