Get To Know "Sand Section" 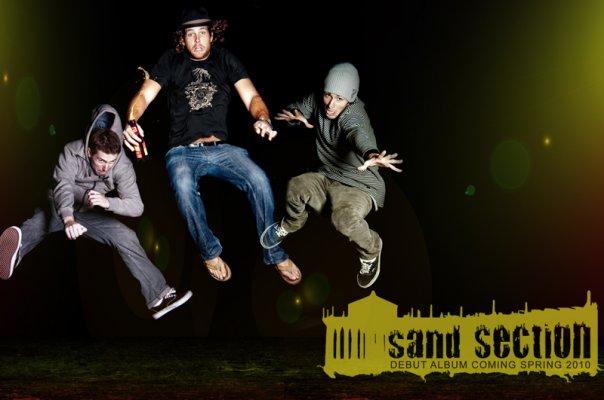 SAND SECTION takes its name from the area of Manhattan Beach, California where the band's three members grew up. In recent years, "sand section" has become a term used by real estate agents to denote the primo lots that abut the town's vast sandy beaches, but in the case of this ambitious three-piece band, the sand section is the border -- Where the suburban sprawl of greater Los Angeles gets pounded every moment by the deep blue Pacific Ocean-- Where a relaxed sun-soaked lifestyle collides with the infinite power and possibilities of the sea. Hence, the band's eclectic and melodic mix of bright coastal music combined with the dark undercurrents of the storm-out-at-sea punk music they played when they first got together ten years ago in middle school.

Jeff Nisen (guitar, vocals, harmonica), Tony Gonella (bass, vocals, percussion) and Sam Mandelbaum (drums, percussion) came up playing in various bands, including MOSS which had successful gigs at venerable L.A. clubs like The Roxy and The Whiskey. They formed Sand Section in 2008 and spent a year commuting between monthly shows at UC Santa Cruz (Tony’s alma mater) and UC Santa Barbara (Jeff's alma mater). After graduation in 2009, they got down to focusing full time on music. Toward that end, they've been playing every show they can beg, borrow or steal in the South Bay cities of Manhattan, Redondo and Hermosa Beach, often sallying forth into L.A., including a March, 2010 show at the House of Blues in Hollywood and a sold out show at the Roxy in April. These gigs have enabled the band to hone in on their signature sound, and establish a solid local following. They have also been fortunate enough to share the stage with bands such as The Dirty Heads, Slackstring, Tomorrows Bad Seeds, Iglu and Hartley, Common Sense, Sashamon, Tribal Seeds, The B Foundation, and many more over their nascent career.

If you ask them their creative influences, it's best to have a full pint in front of you because you're going to be there a while. Although rooted in punk bands like Green Day Pennywise, and Cigar, their music branches beyond punk to feature lush harmonies, blistering guitar solos, melodic bass lines and a unique drum feel. Among their favorite lyricists are John Lennon and Paul McCartney as well as Greg Graffin of Bad Religion.

Although Sand Section tends to draw upon all genres of music instrumentally, their signature sound is attributed to Nisen and Gonella’s soaring vocal harmonies. Whether it be a piano ballad or a hard rock jam, Sand Section’s vocal harmonies are the backbone and major characteristic of just about every track.

These harmonies were ultimately influenced by artists such as Crosby, Stills & Nash, the Eagles, and Dispatch. Nisen’s guitar playing is attributed to a combination of Slash, Randy Rhoads, Eric Clapton, and Stevie Ray Vaughan, while Gonella draws upon the busy bass lines of Led Zeppelin’s John Paul Jones combined with both Cigar and the Deviates’ speed-driven punk rock.

Sand Section has often had trouble being classified within the vague taxonomy of genres, and has always focused on making good music for the sake of good music, rather than to fit any sort of idealistic standards. "If we feel like making an acoustic album with all sorts of weird experimental instruments, we want to be able to do it without pissing anyone off," Tony said recently. "Above all else, we want to remain a group of everyday guys making good original music." Beyond that, the band’s potential is as vast as the Pacific.

Sand Section’s debut album, Truth Over Harmony, is set for release in May 13, 2010, and represents the culmination of over a decade of perseverance. It aims to showcase their abilities as not only musicians but songwriters as well. After spending over 6 months in the studio, the band is confident and ready to hit the road and take this world by surprise.