With so many bands emerging on the reggae scene it can be difficult to create a sound so unique that people actually stop and listen. South Florida based Spred The Dub doesn’t only make you stop and listen, they make you dance.

They tend to shy away from the SoCal punk/reggae sound that seems to be so common these days and prefer to take things in a slightly different direction. Instead of cementing themselves in one genre they prefer to “add elements of dub, blues, ska, rock and surf,” says guitarist Corey Tyler.

“We have heavy dub influences that let us stretch out in many different musical directions and allows us to incorporate different styles,” explains bassist Kevin Johnson, “Because our sound is so eclectic, borrowing bits and pieces from so many genres, it’s not uncommon to see rastas, hippies, punks, hip hoppers, old folks and youngins all sharing the vibes at our shows.” 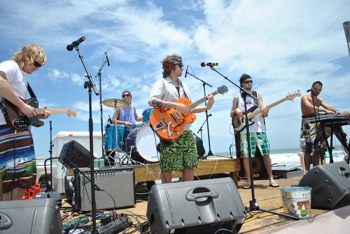 Formed in 2007 and after undergoing some “revisions” the band is putting the final touches on their long awaited studio album due out this fall. Lead singer Mick Swigert says “it’s a long time coming, but well worth it. We have a great mix of friends and talented musicians performing on the tracks and we're stoked about it.”

Dedicated fans will recognize some of the songs off the upcoming album but there are a few surprises. Johnson explains that “for the most part these are songs that we've been playing live for awhile and people who've seen us will be familiar with them, but at the same time we tried to use the studio to give them a fresh twist.”

For those lucky enough to have caught them live, they can tell you it’s quite the experience. You can almost always expect “spilt beer due to heavy dancing” says drummer Joey Bitton. And since they hardly make set lists and instead prefer to feed off the energy of the crowd, “you never know what you might get. No two shows are ever the same,” says Tyler.

With hopes to someday play with the likes of The Black Seeds, The Aggrolites, and The Slackers, they have big things in the works. A tour perhaps? “We’re hoping to hit the east coast and play some killer shows,” says Swigert.  Johnson reassures us that “We're planning some stuff out so that we can bring this South Florida reggae sound to the people. It’s in the works”

Spred The Dub has always strived to bring fresh ideas to the table to ensure good music wasn’t far behind and it’s not going to stop anytime soon. Johnson explains, “this is just the beginning for Spred The Dub”