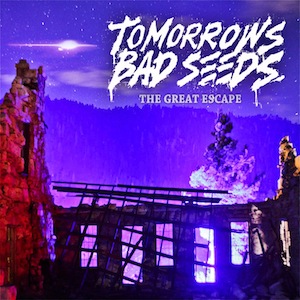 I had the chance to interview Tomorrows Bad Seeds at a recent concert in San Francisco. It was clear the band was ready to break the mold of previous studio recordings. They have a rabid fan base around the country, and an energetic live performance that engages audiences from the first drum roll.

The title of their 3rd studio album, The Great Escape, very much explains their new sound. Scarce remnants of debut album Early Prayers are found in the new project, but that isn't a bad thing. The production style of each song seems to change throughout the entire album; a sign of experimentation in the studio.

The energetic, self-titled intro track is a politically charged rock anthem that takes fans straight into the mind of a Bad Seed:

“In this world of mass confusion/
Corrupt ones with their illusions/
It's hard to tell the difference anymore/
...and you're not alone/
There's a million more, to rise against/
The hems of time, watching as our worlds collide/
What we need now's a revolution/
Destruction, not resolution.../”

The first single, “One Way,” is an up-beat love story that seems to pick up where 2011 single, “Nice & Slow,” left off. The reggae inspired song, “My Everything” does a great job of capturing the reggae/ surf sound Southern California is famous for.

“Shape of Things,” “Rising,” and “Pastime” are uplifting reggae/ rock influenced songs that showcase Tomorrows Bad Seeds lyrical abilities. There is strong second-single potential in “Call Me Crazy,” a song about deceitful women.

The album slows down with the r&b/ pop sound of “Ballerina Girl”, a song about a girl fulfilling her dreams through dancing. There is also the acoustic song “War Letter,” which chronicles a love letter written from a soldier at war to a loved one back home. San Francisco rapper Watsky drops lyrical knowledge on the introspective song, “That's Life.” This song highlights Tomorrows Bad Seeds musical diversity and maturity as a band.

The strongest song of the album is “Los Angeles,” a tale about the trials and tribulations of growing up in L.A. Moises Juarez is a talented vocalist, and his voice matches the smooth guitars without a hitch.

Overall, I was left with a refreshed feeling. Musicians who don't normally get a chance to play other styles of music incorporate genres they like into their own music. Some will be confused by the major departure from the reggae-rock sound of past albums, but judge not too harshly. The Great Escape has a song for every Tomorrows Bad Seeds fan.

Notable songs: One Way, My Everything, That's Life, Los Angeles