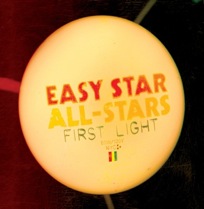 Easy Star All-Stars hit us hard with their new album First Light; a compelling debut full length that is at last, NOT a tribute to another epic group but instead the bands very own unique songwriting at work. First Light effortlessly displays what Easy Star has been holding back these past few years and picks up right where their early E.P. Until That Day left off.

The album kicks off with “Don’t Stop the Music” which after hearing this song, is exactly what they had me thinking. Classic Easy Star production and sound with a blazing horn section and extravagant backup harmonies leading to a very catchy chorus. This song is an instant classic!

Initially “Break of Dawn” almost sounds like an R&B song straight outta the late nineties but riding on an energetic reggae rhythm. At first listen I skipped over the track but after a few spins I actually began to appreciate the melody and Kirsty Rock’s vocals abilities are definitely highlighted during this track.

“First Light” has the same feel as “Break of Dawn” and these two songs are kind of lumped together when listened to the album as a whole. The end of the track gives way to some amazing sax and horn solos and had me thinking that this track could have been a great way to kick off the album as it starts slow and soft but you feel the energy build throughout.

“One Likkle draw” dives right back into that reggae rhythm we’ve come to love from Easy Star. This song is so catchy that upon hearing it on this album, I honestly thought it had been done before and it was a cover snuck in by Easy Star. However, that doesn’t seem to be the case and I can’t wait to see it performed live. For those avid fans of Easy Star, listen closely and you may hear the token “bong toke” heard from the beginning of “Money” off “Dub Side of the Moon”.

“Something Went Wrong” happens to be the one of my personal favorites on the album and follows “One Likkle Draw” quite nicely in that it’s super catchy and will have you singing to yourself long after the album stops spinning. I really appreciate the great use of harmonies and backing vocals on this track.

“Easy Now Star” is my least favorite song on the album. Ras I Ray displays a solid bass pulse which accents the song perfectly and only strengthens the famously flowing chorus. I actually appreciate 90% of this song but Lady Anne comes in at about 2:19 and I can’t help but want to sprint to the next track. Generally, I really enjoy her work but something about her input on this song completely rubs me the wrong way.

“Universal Law” pulls from the same ring as “Break of dawn” and “First Light” in that vocalist Kirsty Rock’s shines throughout. This song gives me an old school James bond vibe; eccentric electric guitars and smooth lustrous female vocals.

“Paid my Dues” switches gears back to that steady roots reggae. The bass line seems quite familiar and somewhat reminds me of a faster version of the bass line from “Pass the Dutchie” throwing the entire song into that same footprint. This melodic formation works very well for the song and the sound is original enough that it doesn’t seem to be treading on Musical Youth, although it did inspire me to re-visit the early 80’s for a minute or two.

I wish I knew what inspired the song “Reggae Pension” The rhythm is carried well throughout the track but I get the sense that the song may have been rushed in production and seems slightly like filler. However the track is spared by the scorching horn section which accents the song throughout and really proves Jenny Hill’s (saxophone) and Buford O'Sullivan’s (trombone) sincere elasticity.

“In the Light” follows in the same path as “Break of Dawn” and actually uses slightly the same chorus but instead slowed down quite a bit and revisits the same nineties R&B feel. It’s not a bad song by any means but I’m finding myself very surprised on how many tracks head in this direction.

Cas Haley makes an appearance on this album with “Unbelievable.” I have never been a huge fan of Cas Haley although to be fair, I’ve never really given his work a fair fight. This Song has completely changed my mind and I’ve since found myself making an effort to listen to his solo work which I regret not doing sooner. “Unbelievable” is easily in my top 3 favorite songs on the record and keeps the album alive towards the final few tracks.

“All the Way” switches directions back to female vocalist Kirsty Rock. I feel this is her best work on the album strictly because it has a tighter fit with the album as a whole, whereas her previous tracks somewhat stray away.

First light comes to a leisurely close with an anthem-y “I Won’t Stop.” This song has a very Steel Pulse vibe to it but the band pulls off the sound surprisingly well. The horns are faultless and I especially enjoyed the use of the Melodica towards the end of the track.

But of course Easy Star won’t let it an album end without throwing in a Dub version of the opening track “Don’t stop the Music.” Easy Star ALWAYS does a fantastic job with The Dub tracks on each of their records not to mention “Dubber Side of the Moon” and this song really makes me wish that the deep dub sound had a larger impact on the rest of the album.

Easy Star have worked their magic once again and produced a very solid non-tribute full length work. I am however very surprised that so many of the songs on the album were very subtle and had almost a late nineties R&B vibe. I fully appreciate Kirsty Rock’s effort on this album however I don’t think it would be a bad idea for her to pursue a solo album in the near future as some of songs are very good but don’t seem to mesh well with the rest of the album. Overall, First Light brings a handful of new favorites to the table and is a very good attempt but honestly didn’t entirely live up to the ridiculously high expectations I had for the album. I wouldn’t say I’m disappointed in the least but feel something left to be desired. I will say that each time I give the album a full listen it continually grows on me. Easy Star always shines brightest when seen in a live environment and I have absolutely no doubt that even the slightly less favored songs on the album may become fan favorites during a live show.