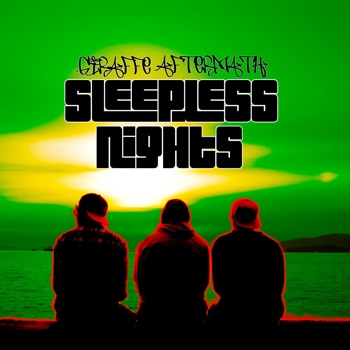 Dub Reggae is all about the feeling of the groove, and the groove is something that Canadian three piece, Giraffe Aftermath, have managed to capture on their new release Sleepless Nights. The album doesn’t waste any time on overly dramatic intros and instead jumps straight into the music with “Lion Man”. The listener is able to tell right away that Giraffe Aftermath has the power to keep you dancing and bobbing through every measure. “Lion Man” also gives the listener a dose of the wonderful vocal harmonies that continue to add to each song throughout the entire album.

“This Night” is by far my favorite track on the entire album. It is an excellently written song that brings together all of Giraffe’s strong points along with a beautiful horn line and melodies that you will find yourself singing along to after only the first listen. “Cops and Cabs” is another strong track that leads straight into the very dubby “Money”. It is almost impossible not to move along to the heavy dub-inspired basslines that fill up this CD and “Money” is a prime example of that. “Who Are You” is another one of my favorites on this album that combines a beautiful heart-felt chorus with a reggae groove. The bluesy side of the band is definitely shown through the guitar riffs of “Happiness”. “Weight of the World” and title track “Sleepless Nights” are both strong points from the albums as well. Naturally after “Sleepless Nights” comes “So Tired”, a catchy somewhat aggressive reggae/dub track. “Throw Your Mind” and closing track “Positive” close up the album on a good note.

Giraffe Aftermath prove to the reggae/rock community that it doesn’t take any gimmicks to make catchy and danceball grooves. These guys have put together an impressive effort in Sleepless Nights and it has paid off. This album is a must have for any fans of the more dubbed out side of reggae/rock.