I dig the cover art and title for the album. Please talk about how they both came about.

Well, the name came about while doing a small tour with Jon Wayne and the Pain. We were having a smoke session, cracking jokes and taking some shots and Chris Hicks, former drummer for JWP said "Good luck knowing you brah". We started dying in laughter...it really makes no sense at all if you think about it. We found the artwork in the studio we recorded the e.p. in, Shock and Audio in Minneapolis. It was hanging up on the wall and just seemed a good fit with the title. We feel the artwork is also a good metaphor for how the music scene is here in Minneapolis. It was done by a local artist named, Kellie Schnider.

There is a lot of diversity in your album. Tell the readers what kind of sound you went in to the studio to create? 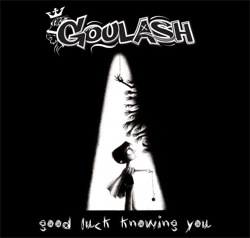 We went in there with no expectations really, we knew which songs we were going to track and just kind of winged it. It was our first time recording in a studio and we really didn't know what to expect.We are a lot more aggressive than most reggae/rock bands and that just comes through naturally.

Is there a song you are particularly proud off on the new album?
Cold Chillin, Queen of Pain.

Where was the album recorded, and did you work with anyone in particular?

We recorded it at Shock and Audio in Minneapolis. Eric Griffen was the engineer on the project and it was mastered by Bill Stertz.

Tell us some of the greatest moments while recording “Good Luck Knowing You”.
The day we got the Vaporizer working in the studio. We got a lot done that night.

What’s the scene like in your area? Is there competition with other local area bands to get on big bills?
Man there are some haters out here, but we love them and push on. We have been fortunate enough though to figure out who is real and who is fake without getting to involved in the politics. In Minnesota it seems that there is a good network of venues and bands to work with but as soon as you start drawing attention some people will shut you out. I also find that the scene here is very clicky. If you dont kiss enough ass, that group wont come to the show. We dont really try to cater to anyone but ourselves and so far that has got us enough fans to be happy, I mean shit, we are doing a interview on Musicbailout for christ's sake!

Does being in a band ever become more of a job trying to market yourself rather than the fun of just being in a band?
We are serious about our work and sometimes it gets to us, but we still have fun on the road and playing shows and will keep doing that until the wheels fall off. The promotion thing does get old, fast and most people have no idea how much time it takes to do it right but, thats apart of doing this grassroots stylee. Gotta cut your teeth.

What bands do you really hope to get to tour with?
We would love to tour with acts like Pepper, Stoopid, Pour Habit, Jon Wayne and the Pain, Fortunate Youth and Seedless. (F.Y.I, GOULASH is down whenever where ever!)

Are there any plans to be on the road by the end of the year?
We are always on the road and will continue to be. We will be in Wisconsin and North Dakota as well as other sates throughout the Midwest. We hope to be in California by next summer.

Finally, name the first 5 things you have planed after this interview?
Vaporizer, Jerk Off, Cigarette, Beer, Repeat.