"Dropping In" Review by Mike Cotton 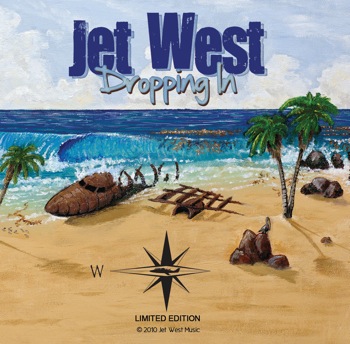 Jet West are not your everyday run of the mill reggae-rock band, they list all the right influences to be classed a reggae-rock band, 311, Sublime, Slightly Stoopid, Pepper, The Expendables but they also list Iron Maiden, Stevie Wonder and the Red Hot Chilli Peppers as influences – and what’s clear is they like to mix the genres whenever they get the chance.

Jet West formed in 2008 and consist of Scott Floquet on lead vocals and rhythm guitar, Chris Warner, lead guitar, vocals and piano, Deren Schneider on bass and vocals and Derek Potter on drums.

The band initially got together to play music as a way to escape the day-to-day race says lead guitarist Chris Warner.

“We knew right away we should continue developing our music, it just felt right,” Chris said.

Chris describes Jet West’s music as if the listener is on a journey, travelling with a loved one, surfing, hanging out on a warm beach with a cold beer or simply hanging out with friends.

And while that description is somewhat accurate, when I listen to Jet West’s Dropping In, I don’t automatically think of being by a beach, it reminds of the sort of music which is pumped out of dive bars every weekend. This is no bad thing; some of my favourite bars can be described as dive bars.

Jet West’s music is gritty, reminiscent of early Incubus or LA 5.  Epic guitar hooks and soaring vocals, Jet West are in it for the long haul and here’s hoping to hear more from them in the future.

http://www.jetwestband.com
Tagged under
Login to post comments
back to top