Lets start off with a little bit of history. Tell us how the band formed?

Jon Wayne & The Pain was formed in 2005 in the historic "Playhouse" carnival house in Uptown Minneapolis made famous by such bands as American Headcharge, Soul Asylum, and Wookiefoot. It was in this house that there would be house parties with a $5 cover (used to pay the rent) with hundreds of people on any given night. The house was actually a recording studio with a medium sized stage, full PA system and lights. Notably, the back stairway had been permanently made into a slide, so you had to watch your step or suffer the consequences. It was here that I started playing acoustic sets in the basement and eventually formed a band and started playing upstairs on the main stage. We then began to play shows around town, as well as some festivals and started to develop a fan base in the Minneapolis area and surrounding small towns. "If your album sounds good, and you write good songs, people will listen to it again and again and you will make new fans."

The new album Follow Through is amazing. Before we get into that, is there any kind of symbolism with the front cover showing a dove in flight?
The Dove symbol could mean a number of different things to anybody. To me the idea of having those colors (Red, Yellow, & Green) all over a bands artwork would imply that they play roots reggae or mostly roots reggae. Considering the fact that our music isn't really roots its just our take on reggae, we just thought the dove with those 3 slivers of color was a good fit, and represented what our message truly is. People have called our music "Redemption Reggae" and I think the dove fit right into that statement.

Follow Through has a few special guests that do not normally appear just anywhere. Tell us about the guest performers and talk a little about how you got them to participate in the recording?
The guest performers on our new album helped us create the unique sound we were looking for. I knew the players we had were gonna help the sound of our album, but it actually surprised me on how amazing their additions to the album actually were. For starters we had C Money (trumpet), Dela (sax), and OG (percussion) from Slightly Stoopid. I had been listening to these horn players for years with John Browns Body and when they joined Kyle & Miles (Stoopid) in 2005 it was such a good fit for their band I could only dream of working with them myself someday. They wrote all the horn parts on our album in a matter of 2 hours and were some of the most professional and fun people I have ever had the pleasure of working with. There is actually a video attached with them writing the horn parts. We also had Oguer "OG" Ocon doing percussion on a number of songs. He played shows with us in Chicago, and Minneapolis before and asked him if he would be on our new album. He agreed and the result is evident. Next we had Phil Savell from Stone Wing (Eric Wilson, Jason Robbins) he is an old school dead head who we were on tour with in 2009. He played lead guitar on our version of "Candyman" the 1970's Robert Hunter, Grateful Dead song and absolutely killed it. He's a great guy who's been a guitar giant in the Long Beach community for years. We also did a song with Yoni called "Fire". You might remember him from the Matisayhu album "Live At Stubbs". He is the reason that I started liking Hip Hop a number of years back. He's the first rapper that helped me realize that all rap isn't about bitches, hoes, and money. The final addition was the female vocal part on the title track "Follow Through" by Chandra Romi. She just happened to come by the studio one day while we were there to get a tour. Her spine chilling performance was done in one take in about a 2 minute period of time. I guess it was just meant to be.

Many new artists, even on their second album, seem to rush the recording process and the quality tends to suffer as a result. The new Jon Wayne and the Pain album is smooth and clean. Who was the brains behind the production?
We wanted to make sure our second album was better than our first, so we asked the best producer/engineer we knew, and that man was Lewis Richards at 17th Street Recording Studio in Costa Mesa CA. He single handily took the ideas we had and made them sound even better than we would have hoped. He played guitar and keys on a few songs and wasn't afraid to add his input. He has made quite the reputation for himself on our genre of music as well as many other styles. He is a true professional who is extremely easy to work with. We also got it mastered at Winterland Studios in New Hope MN by Todd Fitzgerald on an old school analog board that gave it a very warm rich tone. In my opinion mastering is the final touch on any good album and is a necessary expense if you want to separate yourself from the others.

What, in your opinion, are the key components to making a great album?
In my own opinion the first key to making a great album is having great songs. What a great song is might be different depending on who you ask, but I believe has to be delivered with great passion an feeling. You have to believe in what your playing and singing or no one else will. Also it takes plenty of time and money to record a quality album. I've seen and heard many bands who have great songs and a great live performance, but their album sounds like a piece of shit. Ive never heard of any band lately who skimped on the production cost and time of an album that developed a national fan base. If your album sounds good, and you write good songs, people will listen to it again and again and you will make new fans. This has been true for us.

85mph Food Fight is a very fun and unexpected song. What was the collaboration on this particular song?
Good question! We went on tour last summer with Stone Wing who's lineup includes Eric Wilson, Jason Robbins, Lew Richards, and Phil Savell. We had two 15 passenger vans cruising down the Hwy in the middle of Nebraska trying to make it to our Ft. Collins show that night on time. We ended up getting in a food fight at 85mph throwing different food items at their van like cheese, ham, and all kinds of different food at their windshield and them returning the favor. Their manager Mongo came up with the idea of writing a punk song about it and actually came in the studio with us and played guitar and did some vocals on it. His most notable line in the song is "Is That A Burrito?" 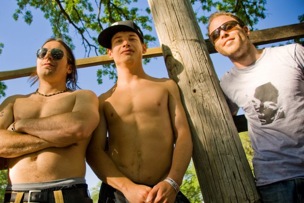 It states in your bio that you started playing guitar when you were 10. I am always curious when people start at that young age if any of the songs created back then ever carry over into their bands later on in life.
The songs I wrote when I was super young were more cheesy than I would care to admit. The fact that I started playing guitar and writing songs at that age though, definitely helped mold my musical background and made the style of songwriting I now have possible.

You guys seem to be touring further and further out of your home state. What cities have you not hit that you are looking forward to playing?
We played somewhere around 130 shows in 2009 and are scheduled to play even more this year. We have covered most of the western half of the united states and are looking forward to playing cities like Austin, Memphis, and hitting up the East Coast as well. I don't know any other way to gain new fans other than steady touring, and it has really started to pay off.

What are the current albums that Jon Wayne and the Pain are jamming other than your own?
Me, Chuckie, And Scott have been jamming to any and all of the 10 Ft. Ganja Plant albums, Seedless, Scientist, Goulash, Dirty Heads, Slaughter House Rootz and The Originalites to name a few. I really dig any of the live Phish albums as well but its not very popular choice with the other guys in the van. Also keep on the lookout for Roster McCabe out of Minneapolis, they are definitely a band on the rise who's been touring steadily.

Finally, any last words to our readers?
To all of our fans: This new album is as much for you as it is for us, we wouldn't be shit without YOU, our fans who make it out to the shows and keep up on our comings and goings. Keep your eyes on MusicBailout as well as Jim Dupont and Jam who clearly has its vision set on getting new music out there for you for everyone else to enjoy.

Jon Wayne and the Pain Links