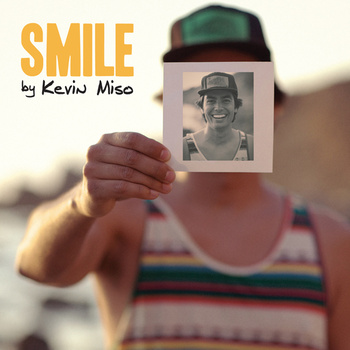 Kevin Miso, an independent singer/songwriter from Southern California and has just recently released his new EP titled ‘Smile.’  His Hawaiian combined with his Southern California upbringing fuse to create a unique sound, which some describe as “The New Old School.”  In the past two years, Miso has played over 300 shows, while sharing the stage with names like Augustana, Sublime with Rome, and The English Beat to name a few.  Being a multi talented artist, Miso can play the guitar, bongos, keyboard, and even the occasional harmonica.  ‘Smile’ provides a fascinating window into a fusion of music and culture, making it an ideal release to close out the summer.

With such a lighthearted opening as “Home,” Miso, perhaps intentionally, has a way of easing you into the rest of the song and the album as a whole.  It starts off with only guitar and vocals, waiting to throw in the drums until the tempo picks up.  I particularly enjoyed the easy-going rhythm of the song, which really gave me a chance to relax and just listen to the music, something I do not always get to do.  “Smile” I felt had a similar vibe as the opener, slower in the beginning with a slight pick up once the percussion was added.  After listening to the first two tracks, I found that Miso embodies some similar qualities as singer/songwriter Jason Mraz.  Whether that was something he was shooting for or not, the strong vocals paired with light background music created comparable vibes.  As the track list progresses, “Rise Up” takes the album in a slightly different direction with a quicker tempo and a slightly more intense feel.  With heavier and more audible percussion, it strays away from the laid back vibes present in the earlier songs.  This is definitely something I hoped Miso would do, separating himself from the mono-toned reggae album, which is far to common on the scene today.  ‘Smile’ is a relaxing reggae album that deserves some attention, and even if you don’t know much about Kevin Miso, I advise you to sit back and have a listen.

With easy-going melodies and acoustic guitar riffs, his new release is perfect for summer.  This is one I enjoyed from start to finish and would recommend to anyone looking for something relaxing to listen to.  I thoroughly enjoyed this album and look forward to Miso’s future releases.

Download Two of his track for free by clicking here.

http://www.KevinMiso.com
Tagged under
Login to post comments
back to top