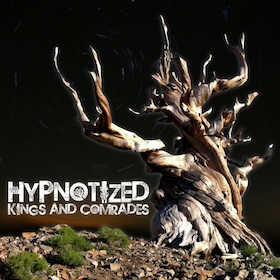 The four piece roots reggae ensemble out of Philadelphia released their new 5 Track EP “Hypnotized” earlier this week. With no surprise, “Kings & Comrades” newly released EP has already jumped to #12 on the iTunes Reggae charts. Forming originally in 2006, the combo started as a two piece acoustic set, after adding three new members and reframing a rootsie melodic foundation, the group out of Philly made their first impact on the industry with their first debut EP “On The Rise” in 2011.  The Group consists of Jeff McCaughey (Vocals, Guitar), Dennis Stolle (Bass), Brandon Paster (Keys, Piano), and Danny Serrano (Drums, Percussion).

“Hypnotized” will provide you with foot-tapping bass riffs, smooth irie lyrics and all types of good vibrations throughout the 5 tracks featured on the latest EP from “Kings & Comrades”.  Jeff McCaughey said of the recent release, “This is definitely our best recording to date. We recorded at Studio 4, outside of Philadelphia, and are really happy with the production of the EP. It's some of the best material we've written and we feel like we've grown a lot since our first EP, ‘On The Rise’. ‘Hypnotized’ brings more variety in the songs we did, and we really wanted to give the fans something different.” The group plans on continuing to record and release their first full debut album later in 2012. “Kings & Comrades” will be performing at the ATX Wildfire Reggae Festival in Austin, Texas in March and also will continue to announce nationwide shows for all of 2012. I highly suggest you keep an eye out on MusicBailout.net for show announcements and go check out “Kings & Comrades” live, you will be “Hypnotized” by the positive vibrations!