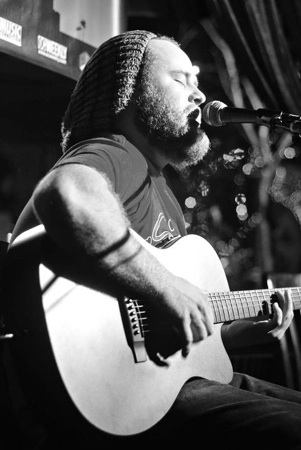 Micah Brown What's In Your Playlist?

Howlin' Wolf - Self-titled (Rocking Chair Album)
This is one of those all-time classics that I return to frequently. The production is so juicy, it allows the amazing songs like 'Spoonful' and 'Little Red Rooster' to live on in style even five decades after they were released. Chess Records had a killer production team and Willie Dixon, resident bluesman, songwriter, and upright bass player for the studios back then wrote so many amazing songs that the Wolf and other luminaries such as Muddy Waters gave new life to.

The Beatles - Rubber Soul
This is quite possibly my favorite Beatles album, although it's tough to narrow that one down. I love the innovations in production on this album, as well as the use of more non-Western instruments, such as sitar (in Norwegian Wood, for example). George Martin started doing more electronically on this album and it is an album that became influential for world, pop, and psychedelic genres. So many favorites on the album for me, such as 'Nowhere Man', 'Girl', and the aforementioned 'Norwegian Wood'. The lyrical content seemed a little bit more sophisticated than the previous studio releases.

Pepper - Kona Town
This album reminds me of my first year of college while living in Hawaii. I used to listen to it a lot back in those days and recently dusted it off popped it in on a road trip to San Francisco. Made the drive go by so much better! One can't not sing along with 'Stormtrooper' and 'Tradewinds' and 'B.O.O.T.' in my opinion. I love albums that bring back good memories, and this is one of those for me.

Neil Young - After The Gold Rush
This is one of my all-time favorite records, and it is a staple on my turn-table at home. 'Tell Me Why' and 'Southern Man' have inspired me more so than others when it comes to songwriting, as well as picking technique. 'Only Love Can Break Your Heart' is one of those dope songs that just puts me in a state, something that good music only can do. Neil is definitely one of my biggest influences.

The Devil Makes Three - Do Wrong Right
Buy this album. It is radiculous. What's not to love about a rhythm-and-ragtime jug band you can mosh to?? This is their first studio album that I feel really captures what the band accomplishes during it's live show. Every song on this album is singable and toe-tapping good. Lyrics are awesome. This band had refined their craft on it's fourth release and are one of my biggest active influences. Hope to play a show with them soon, I really dig their vibes.