First off I would like to say thank you for the opportunity for this Q&A. 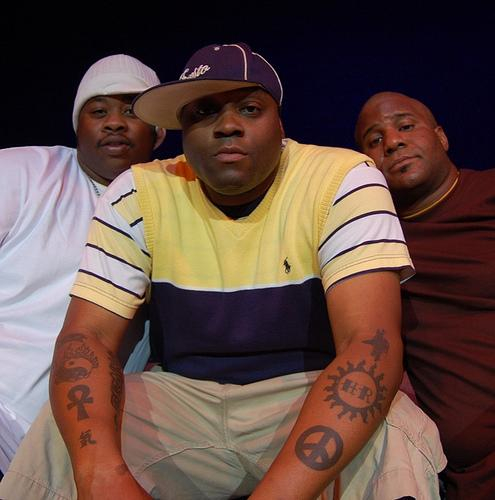 How long have you all known each other and how did you meet?
We have been a band for about 10 years, but like a lot of bands who like to tour, it can take a toll on members so people come and go but Danny and myself have been the backbone of this band for a decade.

I recently caught your show in Austin TX w/ Rebelution and Iration and felt you guys stole the show that night. JB did a killer drum solo blind folded. Is this something done on a nightly basis or was this a spur-of-the-moment thing?
He kind of does the solo as a spontaneous thing. He never knows what he will do from night to night, it is all on the fly every show so most of the time we don't even know what he's going to do LOL!!! But it's a crowd pleaser and that is what we are all here to do. Make the fans have a GOOD TIME!!

While on the road which songs do you enjoy performing the most?
Well right now a few tunes from the last CD, BLOOD MONEY, are really killing it out on the road. To come to mind, "SMOKED OUT" and of course the song most people associate us with our HIT Song (if you can call it that), " PRETTY GIRLS". We recently really started to put songs from the new CD, NEW DAY, into the set and they are starting to grow on both the fans and us as well.

Do you have any good stories to tell about this recent tour?
Well our other guitarist Jackson White broke his fibula slam dancing in the pit in Ft. Lauderdale, FL. How you break your leg at a Reggae concert, I will never know but it happened. He is doing ok and getting better, but that is a weird story. LOL!

What are some of you favorite cities to play? Tell me about the one that stands out the most and why?
Oh man so many but I think a few stand out for me. ASPEN, CO. during winter (for obvious reasons-SKI SEASON), Hmm... Santa Cruz, CA anytime of the year. The people are always kick ass and responsive to the music and the laid back vibes there really make you feel at ease the entire time. Plus that is where THE EXPENDABLES are from, so no more right?

If we were on the road with you guys what cds can we expect to be listening to?
BAD BRAINS, FISHBONE, 24-7 SPYZ, ENGLISH BEAT, THE POLICE, my boys GYM CLASS HEROES, N.E.R.D., SLIGHTLY STOOPID, and like old school soul music like CURTIS MAYFIELD and a lot of the STAX stuff.

How did Stoopid Records come to discover and then sign you?
It was kind of a gradual thing. Jon Phillips at Silverback Music took a liking to what we do initially and it kind of gravitated to meeting the guys in STOOPID and Miles and Kyle getting into what we do as well. They are really great guys and have really good ears for music. I guess we struck a chord with them at the time. They take us out on tour with them from time to time and a friendship began from that. And here we are now! The entire STOOPID RECORDS, Silverback Music thing a family first.

The new album, New Day, is due out October 13th on Stoopid Records. So far the new songs you have released on Myspace is really proving how the band is growing by leaps and bounds. Can you briefly describe the music-making process?
Hmmm... I think it is like most bands and/or songwriters. You kind of come up with ideas for songs and they slowly take shape to form what becomes a completed collection of material to make a CD. I think we have grown as writers and kind of know where we want to go in the future to move the music. We go ahead without what we see as getting stale. You never want to do the same record twice and I see that happening in music quite a bit. We just want to provide music fans with a fresh set of songs ever CD we make.

On a previous record you recorded Grave Robbers with Slightly Stoopid's Kyle McDonald. On the new album you feature Miles Doughty for Spliff City. How is it like working with them?
Both of the dudes are incredible!! Man the talent they have is unmatched and they have proved that with the success they are having right now. Kyle has a keen knowledge for musical arrangements and Miles has an equally keen knowledge for vocal arrangements. I had a blast having two guys who I look up to blessing tracks on our CD's. They don't have to take out the time to do it but they do and we appreciate all they have done for us.

How long did it take to record this album?
About 2 months of tracking and a few more for the mixing and mastering.

What can fans expect from this album?
THE BEST DAMN CD OF THE YEAR LOL!! Nah, well maybe. Man we tried to make a CD of songs that you can take to the beach and chill with, dance to, rock out to, and Get NAKED to. I think we achieved most of our goals for it. We want to be something special and different than a lot of the other bands that are doing this. Trying to take the music to another plain and place. If people dig it cool if they don't their loss. I know our fans will love it and we cannot wait to see them out on the road with this new CD, because they know it is a TAKEOVER and a NEW DAY.

How has you music evolved since you first began playing together?
From a raw 3-piece band from the swamps of Louisiana to a 3 piece of road tested swamp living vagabonds who love BIG HOOKS and SKANK GUITARS. We have found our niche over the last few records and the kids have told us to keep right where we got it!! IF you have not peeped us out go and grab the 3 records and hear the progression for yourselves.

What has been your biggest challenge as a band?
To not give up. It is not easy touring in the beginning with no money and no fan base. To also get people from the West Coast to believe that a band from the South can play a music genre created on the beaches of California. LOL!! We did it though, WE DID IT!!

Who were some of the bands that you grew up listening to that inspired you to make this style of music?
BAD BRAINS, FISHBONE, THE POLICE, THE CLASH, ASWAD for the most part!

What were each of you doing before Outlaw Nation?
I was working in the music biz in the Managerial area, Danny was a Warehouse Forman for a window fabrication company and JB was a Crane operator for a Train shipment company.

What are you plans following the upcoming release of "New Day"?
TOUR, TOUR, TOUR, all over the WORLD, and hopefully do enough to make another one LOL!!

Thank so much for your time and cant wait to catch the next show!!