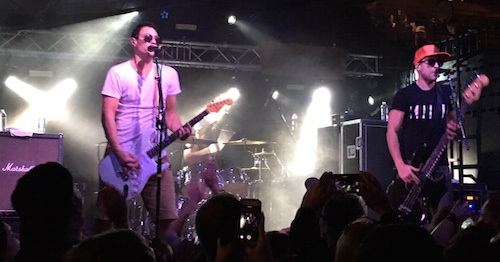 It was a sweaty-confetti-filled Sunday at the Mohawk in Austin as Pepper and Less Than Jake rolled through Texas. The two bands have enjoyed long successful careers, and their loyal following showed up in full effect, swarming together like a school of salmon. Needless to say, the evening’s entertainment provided the perfect spice to the crowd that complimented oh-so-well with a nice smoked herb seasoning.

The Mohawk provided a nice open-air atmosphere to a windy January night. As the crowd bustled in, early birds caught a big up-and-coming band LAW Record’s own Kash’d Out as well as the punk-influenced Red City Radio. The night showcased the long range of influence these bands have played on pop culture and the punk rock scenes, with people of all ages showing up and creating a weekend environment on a Sunday night.

Fans were treated to a refined and matured Pepper popping up on stage, fully clothed. Celebrating the ten year anniversary of the breakthrough release No Shame marked a major milestone in the band’s lives and showed how important friendship and dedication can be amidst the high-turnover rate many bands are confronted with. The fan-centric approach the band exemplifies mixed with an unparalleled stage presence has kept Pepper in the hearts of many fans.

The band kicked off the night with “Love Affair”, setting a perfect tone and giving any first time Pepper fans a taste of what’s to come and straying away from the typical love song for the lowest common denominator vibe many shows offer. Next up was “Green Hell” which showcased the light programming by matching the lyrics to the green lights. Next up the band played a couple tunes off their new album with “Start You Up” and “Vacation” which highlighted the direction of the band’s progression and gave old fans a reason to pick up a copy of Ohana at the merch table.

Fan favorite Kona Town was represented well in the next two setlist choices “Ho’s” and “Sittin on the Curb.” The band reminded everyone of what makes a live performance so special by interacting with the fans on what should be played next, resulting in “Curb” being played before returning to the milestone anniversary hits “Your Face” and “No Control.”

Following the two hit singles, Bret and Kaleo exited the stage for a special drum solo by the ever-awesome Yesod Williams. The timing was tighter than a circus rope as the solo transitioned into playing an overdub of the famous Daft Punk song “Get Lucky” complete with spectacular lighting effects The special middle of the middle-of-the-setlist interlude was then continued by bringing out Greg Shields and Jackson Hauserman of Kash’d Out to perform an acoustic version of “Bones” with Brett and Yesod. During this performance you were literally watching teacher versus student. Brett really brought it with “Bones” and you can tell once the tour goes on that performance with the Kash’d Out boys is only going to get tighter and will be the highlight of each night going forward.

“Reckless” off of Ohana was next on the agenda, followed by my favorite sex-fueled party song “F*** Around” from their previous self titled release Pepper. After hyping up the crowd with their signature playful style, Pepper brought the vibe back down for something a little sweeter in “Crazy Love.” Finally, the band closed the night in a massive style by performing power-rock anthem “Ashes” reminding everyone to leave their worries behind just in time for the ska-punk antics of Less Than Jake. Confetti blasted out from the music heavens as “Ashes” finished, leaving fans wanting more. And of course, no show would be complete without the chiseled-abs from the boys of Pepper, and bassist Bret Bollinger made sure the ladies didn’t leave disappointed by throwing his shirt into the crowd before exiting.

Comment Here
{fcomment}
Last modified on Thursday, 26 January 2017 17:32
Tagged under
back to top