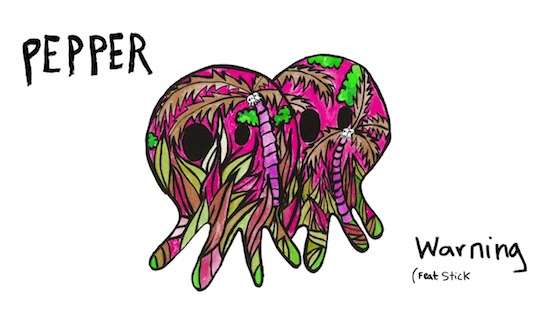 When it comes to new music from the boys from Hawaii there is always an excitement. Add Stick Figure to the single and you are sure to have something special. The new song from Pepper, "Warning ft Stick Figure", is officially out and is yet another creation out of the band that makes a Pepper fan only crave and anticipate a new album. The last release from them "Good Thing Going ft. Miles Doughty of Slightly Stoopid" was released in 2017. Luckily the past few months have had some incredible releases individually, Bret Bollinger & The Bad Habits with their release "Lo-Fi" is start to finish incredible. Kaleo has also put out music with Remy Derochemont for Sabotage Soundsystem. A bunch of single releases were dropped and there is a new album in the works as well. The song Sabotage is a personal favorite. And of course Yesod has his podcast Disposable Heroes. If you have yet to check that out do so now by clicking here, good stuff for sure.

As for the new release Stick Figure had this to say about the track:

Had the honor of producing a new track for Pepper called “Warning.” The Pepper boys presented me with a bunch of demos last summer and I was really drawn this song in particular. My goal was to try and recreate and capture the “Kona Town” sound and vibe on this track (my favorite Pepper album) combined with the signature Stick Figure dub influence.
All the music was tracked and recorded at Great Stone Studios in Oakland, Ca & mixed by myself and Johnny Cosmic. Super stoked to be working with Pepper and I know you all are gonna love this track!

To hear the track see below and to purchase click here. Be sure to catch Pepper on stage for Iration's Live From Paradise Tour with Fortunate Youth and Katastro.