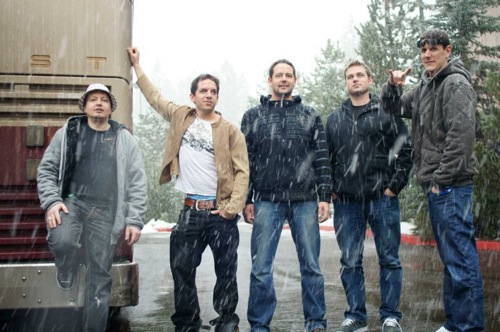 The original band name was Redeye. Why the change to Redeye Empire and can you explain the meaning behind the name?

The name came about after partaking in a certain “west-coast recreational activity” and toying with several different names. The deciding factor was a good friend of ours entered the studio in mid conversation and announced that he had just gotten off the red-eye flight from his vacation…It all just seemed to make too much sense. Adding “Empire” seemed fitting because of the huge number of close friends we have sit in and jam with us on different occasions….that and the name “Redeye” on its own was being overused.

Here in the U.S., this genre is big in certain areas and not so big in others. How is this style of music doing in Canada?
It seems to be on an upswing. We’ve been getting radio play, along with other bands of the same genre and generally people seem to be coming around to the style. Its so refreshing to hear more people talking about it wherever you go. 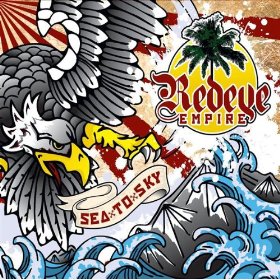 What bands would you say helped shape the sound of the new record Sea To Sky?
So many!!! Marley, Sublime, G Love, The Red Hot Chili Peppers, Zeppelin, Kyuss, NOFX, Albert King, Stevie Ray Vaughan, …we all grew up listening to different stuff and new music keeps influencing us.

Before the new album was being written, was there a clear direction of where it would go?
We wanted to simplify things; leaving room for strong melody lines and vocals. That being said, some of the best things to happen on the album happened in the studio without ever being planned for…to have a true sound, we feel you need that creative spontaneity.

I really enjoy listening to the new record from start to finish. The song that caught my attention the most was “Ramble”. This song comes off a classic rock album. What is the inspiration in playing this song?
We all really love Zeppelin and like to throw something unexpected at audiences when we play live. We had occasionally teased live audiences with little tastes of Zeppelin, but started playing “Ramble On” all the way through and felt it was worth recording. Though it is a cover, we do feel it still has strong elements of our own sound in it…plus its really fun to play!!

Do you have a personal favorite on the new album, if so which one and why?
I’m partial to “Steal My Heart” and “Roll Up”. “Steal My Heart” has a dubby hauntingness that still makes your head bob...It was a sound that we were striving for on this album and I feel it really represents us as a band

“Roll Up” just reminds me of a laid back summer day…it sets me at ease. It’s a great song for cruising around on a warm day!

Now that the album is out, what are some upcoming plans?
Playing a ton!!!! We have been very focused at playing as many shows as possible. We just recently returned home from playing a month long US tour with G Love and Special Sauce and now are gearing up for some smaller tours and local shows. We love spring and summer shows and we are getting ready to spend the summer playing music!

Redeye Empire has already toured with some big names in the scene like Pepper, Iration, and most recently G Love and the Special Sauce. Who is next on the wish list?
That’s too difficult to answer…there are so many bands we admire that we would love to share the stage with!!

What local bands in your area are you guys hype about?
I’ve been listening to a bunch of great music recently…Goodbye Beatdown are some local buddies that are killing it! Rude City Riot and Los Furios are two more bands I have been all about lately. Though these fellas aren’t necessarily local to us, I have been listening to a bunch of Tomorrows Bad Seed and Dirty Heads as well…those guys are putting out some crazy tunes!!!!

Any final words for our readers here at MusicBailout.net?
To our fans…thanks so much!!! You are the reason we keep doing what we do and we can’t wait to see you all soon. If ya haven’t checked Redeye Empire out yet…you are missing out!!! Next time we swing through your town come say “hi” and we guarantee we will get you moving!! Peace out ladies and gents!