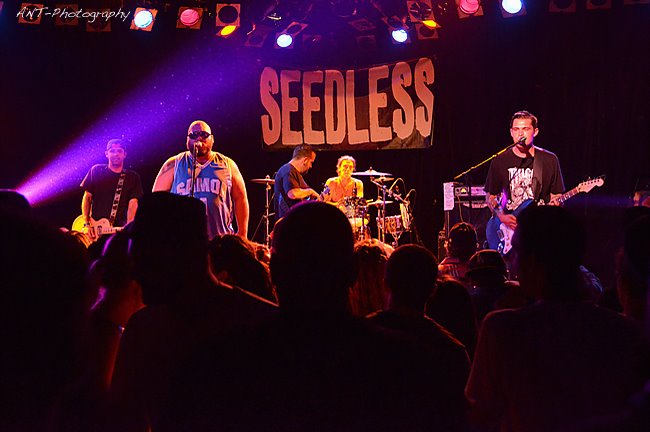 Navigating through the thick and boisterous crowd to get backstage was like trying to find your way out of the Amazon. Typhoon Saloon was electric with energy as the band rocked their final chords like it was the last time they would ever play. Hundreds of fans, friends and family gathered on this energetic Thursday night in San Diego to be rocked by one of the most prominent reggae-rock bands on the scene, Seedless. A testament to their humble and family-like approach to, well, everything... lead singer Casey Sullivan stopped and hugged or shook hands with just about everyone he came in contact with as he guided me down the dim hallway of Typhoon Saloon toward the green room. Casey comfortably collapsed onto the couch backstage with the look of someone who had just given a hundred and ten percent of their energy to the fans. I had the pleasure of being able to chat with Casey and the rest of the band for a bit after the show. Here I got the low-down on Seedless’ new album, influences and what fans can look forward to in the future from this reggae-rock powerhouse.

Fans are more than stoked for the new Seedless album, how different is this album from your previously released ‘Twisted Roots’?

Casey: There’s a big departure from Twisted Roots. We really wanted to branch out and try new things. It has more rock, experimental rock, progressive rock... pretty much anything; we just want to write music, we’re not tryna put a genre on it. We love reggae, we love it all... whatever music comes to our heads during our time in the studio, that’s what we’re making.

Sounds epic! I definitely heard some of the awesome and heavier riff-based stuff off the new album via your Youtube channel, it’s a cool direction. Do you guys have a planned release for it?

Casey: Thank you so much! I can’t wait to get it out. We are in the studio recording and writing right now, and we don’t wanna put a date on it to rush it. We’re aiming for sometime maybe in the next six months, but don’t want to promise anything. We like taking our time and letting it build organically. I mean, we could go in and record it in a weekend, but we want to give the best release possible.

Who are some of your biggest influences for the new album, and just in general?

Casey: Wow, there are so many. John Frusciante (former lead guitarist of the Chili Peppers), not just for his work with the Chili Peppers, even his solo stuff, and just his whole approach toward music in general. Incubus, we all love Incubus. RX Bandits from Long Beach, those guys are homies. Tool has always been a big influence to us, I love their extended metal jams. The Beatles, obviously. So we fit somewhere in between all of those, and of course, Sublime, who really got our genre rolling... always big ups to Sublime, we all love them. 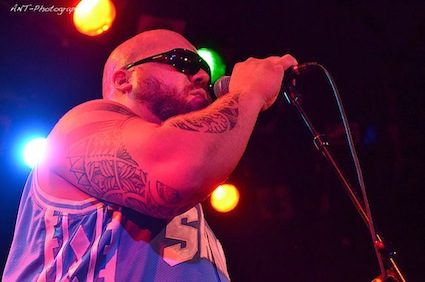 How do you guys approach the songwriting process for the studio?

Casey: There’s really no set way, it’s a little bit of everything. Sometimes I’ll just bring a chord-progression or a melody in with some lyrics, and we’ll all collaborate on the idea. It’s never just “this is how it’s going to be”. Grant and Shay almost always have a sick breakdown they want to add, and if anyone has a good idea we will figure out a way to make it work... we like to keep the whole experience very organic and collaborative.

You guys rocked an epic set for a huge fan turnout at the California Roots Music and Arts Festival in Monterey this summer. What was the biggest show you guys rocked this year?

Casey: Cali Roots for sure. I mean, this was the third annual, and the last two were cool, but this one was just like exponentially bigger. It was epic, and it was a good example of the way this whole scene is progressing and growing. It’s an excellent community; everybody works together and we all move forward much faster... I‘m very proud to be a part of it.

Speaking of shows, I noticed Lewis Richards (producer at the famed 17th Street Recording Studios in Costa Mesa) was killing it on the bass tonight for you guys... obviously a fill-in for normal bassist Grant Rivera, what happened?

Casey: Grant’s a little under the weather right now. I was just trying to keep it low-key, but Grant had a good excuse for not being at the show tonight. We couldn’t have had a better fill-in though, Lewis is the main man behind all of our studio stuff so he knows it almost better than we do.

Sounds like a good excuse to me, and who better to fill in for the time being! As far as shows, the album and other exciting stuff for Seedless goes, what are your biggest aspirations for the next year?

Casey: The album is definitely the thing we are most focused on. We are putting everything we have into it, and we really want to pleasantly surprise our listeners, ya know? We want it to flow from start to finish, touch new genres and just be something that listeners can enjoy all the way through.

Let’s entertain the Seedless fans out there a bit... what is the funniest story Seedless has to share with the world?

Casey: We’ll keep that one on the downlow. A good story to tell is how Joe Bakhos (rhythm guitar) is the nicest guy in our band, and probably like the nicest guy you’ll ever meet, like never does anything wrong... and he’s the only one of us that has ever gone to jail on tour. We were in Houston, and he just walks out of this building with a beer, and of course a cop is standing right there. He gets tossed in jail, and we had a show the very next day, so we had to leave him overnight there in jail to go rock this show.

Shay: If he hadn’t had that awful moustache then he probably wouldn’t have even been arrested! He looked like he belonged in jail!

Joe: It’s true, I would’ve arrested myself if I had been that cop!

It’s always the one you least suspect isn’t it? Last but not least, what’s Seedless’ favorite place to mellow out?

Shay: Right here, right now with you! (Laughs) It’s always fun hanging out in Orange Circle, many good times there.

Thanks dudes, excellent show tonight and best of luck with the album and see you around!

Prior to the interview and after Irieside rocked an awesome horn-driven opening set, Seedless performed their trademark rollercoaster ride of a show on this beautiful summer night in San Diego to the well-packed venue of screaming supporters. Their cohesiveness and natural vibrance, both on and off the stage, resembles that of a band who is just starting to crack into their full musical potential. As a nationally touring outfit with a strong and faithful pack of supporters, there’s no doubt that Seedless is rising fast toward the top of the reggae-rock scene and beyond. As I was walking out I ran into Seedless’ powerhouse support vocalist Matt Liufau, who had just narrowly avoided a car towing... he may have said it best when he said,

“It’s all good, just part of the ride... we love you all so much and thank you for your support! Seedless nation baby!”

Seedless nation indeed. Make sure you keep an eye on these guys, they’re only going up from here!