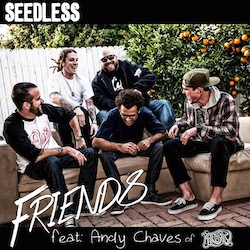 The year is starting off just right for Orange, Californias Seedless. The band has been added to the lineup for California Roots Festival in May in which they will be playing along side some of the biggest names in the scene including Slightly Stoopid, Matisyahu and Rebelution just to name a few. Not only that but Seedless will be releasing their new album titled "The Orange Album" set to release in April. The fans have been salivating for a new release from Seedless since their last album Twisted Roots was put out in August of 2010. To keep the fans from putting themselves in rehab the band has put out a few tunes since most recently the single "Friends" that will be added to the new album. The song features Andy Chaves of Katastro, a band that has been making some big noise out in Tempe, Arizona. When I spoke with Casey of Seedless he gave me a little insight on the song and how the collaboration took place. He said "I wrote the song while working a dead end job last year humming the melody and wrote the lyrics on the drive home from work when I met up with the band and collaborated on it together. Then we decided that Andy would be a great fit for the song and brought him down to 17th Street Records to collab with us on the lyrics and style." You can tell Andy was the right choice when listening to the song adding that unique sound I am sure they were looking for. Casey also explained how anxious he is to release the new album because of a major shift in style from their last album. I wouldnt be worried though, with the roster this band has you can bet that each piece to the puzzle will make any album shine bright. Download the new song by clicking on the link below.