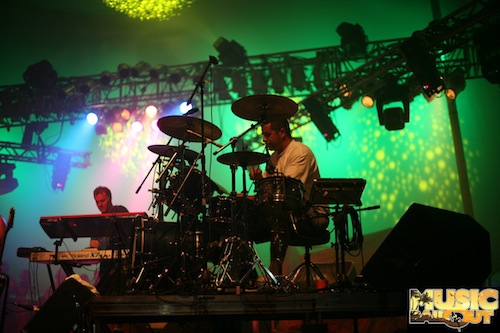 Slightly Stoopid is busy, so they aren’t the easiest group to grab interview time with, but Rymo greeted us with a warm smile and offered a lot of insight into the bands happenings as well as his own projects. His professionalism and laid back attitude served as a grand combo for the interview. We look forward to hearing the new works from Slightly Stoopid due out this fall. Their shows are always entertaining. Even the acoustic show was charged with energy and gratitude for the crowd. You could really feel it when Kyle offered up a pre-rolled joint to the audience and gave the front crowd a shot gun hit. Their performances at Wakarusa were ones to be remembered.

You guys live in Ocean Beach San Diego. It's a nice spot - I feel like that area just soaks up your music. Do you like playing near home or do you enjoy playing on the road?

Rymo: You know I like both. I like to play at home, because of course our friends and family are there. I really enjoy traveling a whole bunch, eating weird food and drinking local beers. I like the experience of being in different places all the time.

Do you have a favorite microbrewery?

Rymo:  I do, but it's in Oregon. Deschutes Brewery, that's probably my top thing right now. 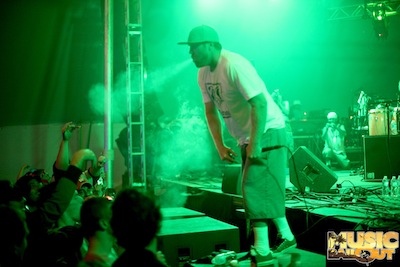 What's the weirdest food you've eaten on the road?

Rymo: Well, we were just in Japan. Eating there is sort of a trip. It's so different than what we're used to here. We had a couple of times where we didn't even know what we were ordering. We were just kind of pointing at pictures and saying with our hands ‘two.’ So, who knows, we might have eaten something funky. It was a cool experience.

Speaking of international trips lately, was Japan one of the highlights?

Rymo: We were there most recently; just two weeks ago. But, this year, yeah, we've been to a bunch of cool places. We went to Australia and Brazil as well.

So you guys have been a part of the summer fest scene for many years now. What makes one different from the other?

Rymo: You know honestly, they're really similar in a lot of ways. Obviously, the line-up dictates the crowd usually, and depending on who's headlining or who are the main acts are - that can change the crowd. But as far a scene goes, as long as you have good weather, people are people. It doesn't matter what state you're in; people are excited to be out and enjoy the sunshine and check out a bunch of live bands. We love doing it, because we get to hang out with our good friends like G Love. We’ve worked with him a whole bunch. Our horn player just played with him right now. We get to hi-five all those guys. So often our tour schedules are completely opposite, so when we have these overlaps we get to see a lot of our friends and the bands we like. I'm really excited to see Primus tonight. That's like one of my all-time favorite bands. I didn't even know they were playing until someone mentioned it today. 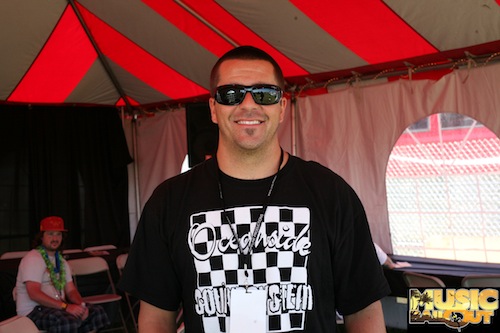 Do you plan your schedule where you can see and enjoy the whole festival or do you pack up right away?

Rymo: Depends. For this we're playing an electric set today and acoustic tomorrow. We've been doing that a lot more with festivals and it's been great because it allows us to kind of show two sides of what we do. And it's not just full on let's get crazy and go totally nuts, so there's sort of a controlled side to what we can do. Typically, now that we've been able to do that (kind of an unplugged set and an electric set), that has allowed us to stick around at festivals for more than 24 hours. We’re here [at Wakarusa] for two days. In Australia, we did the same thing. We did electric one day and acoustic the next. It allows us to experience the festival more instead of just pulling in, playing a show, and getting right back on a plane. It's a lot more fun to experience the chaos of festivals.

Is there one set that you prefer more than the other: acoustic or electric?

Rymo:Both for different reasons. They bring out different moods. With electric you can get crazy with full volume and the crowd just going off. I also like the acoustic because it's a lot more controlled, and in a certain way, a little more expressive because there's a little more dynamic control. It's not just full blown the whole time. Live electric shows are typically higher energy. You try to lift the crowd up as much as possible; whereas with our acoustic set, you can play through a little more of a variety of moods.

So you've been doing drum lessons on YouTube for a while now, how did it get started?

Rymo: I have a good friend who's one of the top dudes now doing it. We played in some bands together back in the day. I ran into him at a music conference a few years ago and he was telling me what he was up to. He said he quit his job and started making these videos full time and using them as a way to sort of gain fans and create a following. He also has DVD's that he sells, so he's able to sort of connect one end into the next. It's always been my goal (on top of performing and playing in the band) to be an educator. I studied music in college and even now I always try to learn new stuff and keep growing as an artist. That's just a thing that he sort of recommended. He said to just make 10 and see how it goes. They can be so super basic or more complex and technical.

Do you edit them yourself?

Rymo: Yep. I'm kind of slam-bam about it. I put the camera up and I've got my drums and I record for 10 minutes. I’ll have some sort of song, practice technique or beat that I'm trying to teach. But, yeah, I've been really enjoying it. It's been a lot of fun.

Do you take requests from anyone for your education videos on YouTube?

Rymo:Yeah, people will email me. Sometimes it's hard to be as ‘on it’ because I'm doing this [being on tour] pretty much full time. So, that sort of takes a back seat when I'm traveling. But, yeah, people will request songs and I'll try to learn them. Basically I learn them myself, play them a few times and then teach the backbone of the whole thing.

You have a few shows in Hawaii and then you’re off to the 311 Unity Tour. What are some of the things you look forward to the most when you're on the road?

Rymo: Seeing friends and family. A lot of us have family scattered around the US; we're not just in California. I've got some really great friends that are out in Hawaii, so I'll get to hang out with them. We'll be out there pretty much 8-9 days with only four shows, so we've got a kind of work/play thing going on. I'll be doing quite a bit of surfing. We get home from that and basically start rehearsing and preparing for the 311 run. That's going to be awesome. We're going out for about two months, so we'll be hitting pretty much every major city as far as I know. I usually don't look at the dates, until the week before because sometimes you get overwhelmed. It's easier to think it's coming up at some point, but I'm not going to dwell on it or over-plan because then you just freak out.

Is there a certain island in Hawaii that's your favorite?

Rymo: Maui, because my best friend lives there and that's where we'll be staying for about five of the days. We've got some good friends and family on the big island and Oahu as well, so it's going to be good to see everyone.

What has changed most since Slightly Stoopid first started touring on the road?

Rymo:We've been doing it for a long time. I think we're starting to grow up a little bit now. Quite a few of us are married. A couple of guys have kids. It's been a good thing, you know. We're in our mid-30's now; we're not 18. When we first started, everyone was just going crazy: partying, meeting girls, hanging out and going off. A lot of that stuff has really taken a back seat and now we're sort of in the next phase of our lives. A lot of the guys are starting families and getting a lot more focused. It's been nice. We have been kind of taking our time making our new album, which should be due out early August. So, I think it's enabled us to have a lot more focus on the importance of music. I think it's brought us closer together in a lot of ways and grounded us quite a bit more. I would say that's probably the biggest change. 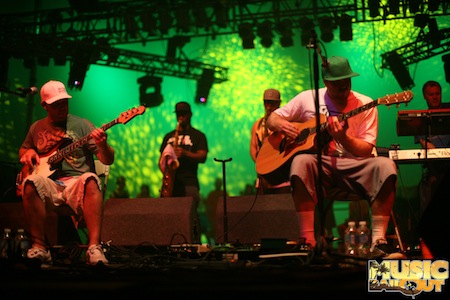 Regarding the new album Live at TRI Studios, how was it hanging with Tommy Chong and Bob Weir?

Rymo: Ah, it was wild man. That was kind of two dreams in one. Tommy Chong is just a crazy character. And, Bob Weir is a guitar player from the (Grateful?) Dead, what more can you say? I grew up in the same area as those guys. My hometown was basically their hometown, San Rafael, which is north of San Francisco. We used to see them driving around. We'd see Jerry Garcia in his blacked out van. He'd be cruising with his big white hair. I actually went to school with one of his daughters. Yeah, so it was kind of a cool thing for me individually, because I'm from there and hadn't been back in 20 years, so to come back and do it with some of those guys was really special. It was really great to hang out with them for sure.

Any possible side projects for you?

Rymo: All of us kind of have a coupe of side projects that are going on. At this point, (Slightly Stoopid) is the main focus for all of us. When we're off for a good amount of time, each guy kind of has things they do, and solo projects. I've released a solo CD that sold like four copies [chuckles] and I've been kind of working on another one of those. Yeah, but most of the guys, like C-Money, has a band. DeLa sits in with other artists. Miles and Kyle are always writing. Everyone's kind of staying busy in one way or another as individuals as well as with the band. But, this is kind of the bread and butter at this point.