Get To Know "Social Green" 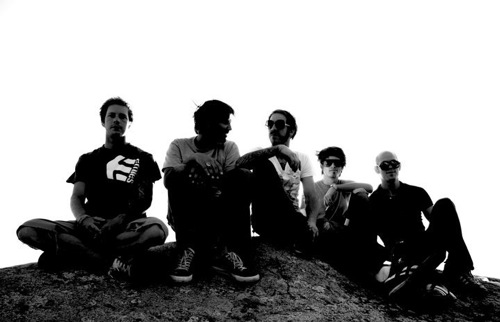 In 2004, three friends lugged their battered, broken, scratched and weathered instruments into a small, sweaty garage in the North San Diego County hillside. Young but already veterans of the local scene, the musicians’ backgrounds ranged from punk rock to indie, hardcore to ska. Hours passed, strings broke, beers were drank and cigs were smoked. When the 3 emerged, a new collective had been born: Social Green.

The band name itself refers to ignorant youth and appropriately became the mantra they followed. With sights set on challenging the status quo, Social Green sought to blend ska, rock and funk under an umbrella of culturally and socially thought provoking lyrics.

By 2005, Social Green had grown to a 5-piece and was ready to hit the studio.

Their first release, The New Mutants E.P., was a 6-track classic record that quickly sold out it’s limited numbers and has since acquired a legendary status and is a highly coveted piece of the band’s early history.

That same year, the band met Valery Safudinov (AKA “Seisky,” AKA “The Father of Soviet Rock N’ Roll) who instantly recognized the band’s unique style and musical maturity. With Valery manning the board, Social Green laid down 14 tracks at Flight 19 Studios in Escondido, CA. The recording session would eventually become the band’s first full-length album, Sounds of Revolution. The album was pressed in large quantities and to date, has sold thousands of copies in southern CA.

With a well-rounded sound, an established following and two releases under their belt, Social Green proceeded to tear the San Diego scene a new one. Social Green has shared the stage with the likes of: The Slackers, English Beat, Eek-A-Mouse, Voodoo Glow Skulls, Buck O Nine, Mad Caddies and Elijah Emmanuel. While performing a show with Chris Murray, three members of Social Green (Adam, Sean and Jordan) were asked to occasionally take over the responsibility of being Chris’s backing band at his southern CA shows.

Social Green has been featured live on 91X (radio) twice, has appeared on Matt Cook Live and has taken part in several benefit shows, including the Heart of Africa benefit.

Armed with an impressive resume of live shows and an ever-growing fan base, Social Green hit the studio once again in 2009 to record a new E.P. Once again working with Valery Safudinov, the band laid down 6 new tracks for their yet-to-be-released CD. The new effort was recorded ‘live’ in order to mimic the intensity, passion and ENERGY that could previously only be experienced at their live show.

With tours and potential label distribution looming on the horizon, Social Green is poised to go from local favorite to national breakout. When things blow up, you want to be one of the people who can say “Man, I first got into these guys before they got all huge,” don’t you?