Stranger "Above It All" Album Review 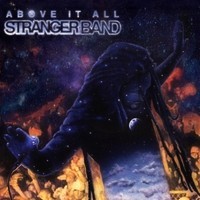 A beautifully eerie background static fills the room as a somber keyboard melody sets in. At the exact moment you have no idea what to expect, the rhythm section quickly rises from the depths. The mesmerizing pulse of Arthur Tilley’s bass leads into the first verse of the EP, and you’re off.

One of Stranger’s epic abilities is to bend and twist traditional reggae sounds into any and all sorts of music. This becomes immediately apparent, as a busy hip hop feel takes over the traditional reggae pulse in “Here We Go”. The verse builds into a chorus that can only be described as an orgasm of sound.

Following with the fun and lighthearted jam “You Got It” (grab someone and dance for this one), the title track sits third on the disc. “Above It All” strays beautifully from the traditional reggae path and pulls you in with a catchy acoustic riff, layered with an even catchier hook. While Stranger is a reggae-rock band, I wouldn’t be surprised to see this song on an alternative station’s top 10 list. It’s not what a listener is expecting to hear on a reggae-rock album, and that is what’s so cool about it; it lets the band’s versatility shine through, as well as the fact that these guys are just phenomenal songwriters.

“Now Is the Time” showcases the band’s classic reggae-rock style, fueled by the trademark horn section of Aaron Hudson and Don Carter, while “All Yours” takes the role of beautiful love song on the album (this is the song you’ll want to learn to sing to your special someone). Lead guitarist Daniel Montgomery slices through the rhythm of the song with an awesome acoustic guitar solo that follows the vocal melody through its own unique voice.

The song “Universal Love” is a fan-favorite on the album, and aims to spread Mr. Bob Marley’s creed of “One Love” to the world. Filled to the brim like a well poured beer, this reggae track conveys its message strongly with the powerful and bright musicianship of the band. The EP closes out with a soft acoustic song called “Thank You”. David’s incredible voice sings side by side with a light acoustic guitar, and sends an open message of thanks for everything in life. The whole production is held together by their unbelievably talented drummer Nolan Clark, who is both the glue and pulse that holds their otherworldly sound together in the cohesive and beautiful musical force that is Stranger.

Even as I write, Stranger’s tour schedule is getting broader and busier, they are gearing up to rock some awesome shows in Hawaii, and the hype has started; the stars are aligned for Stranger to do big things in the near future, and you’ll want to be a part of it. But don’t take my word for it, discover this for yourself. Stream their entire new EP and more free of charge on their website. You’re welcome.