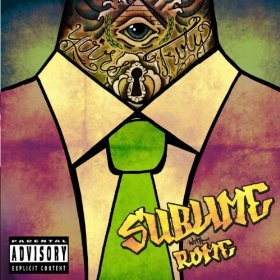 Yours Truly features 12 standard full length songs that together make up an album that is over a half an hour of pure audio delight. This musical trio is the perfect recipe involving 2 parts traditional reggae/ska and 1 part new school reggae/alternative to produce a sound that can be enjoyed over a broad-base of fans no matter what their musical background. The album kick starts with their hit single “Panic” which is the perfect song to wake listeners up and gets the energy flowing as it bombards your speakers with fast pace guitar chords, a well accented saxophone line and  head bobbing breakdowns. Things slow down a bit for the next song, “Only”, which is one of several original songs that were created by young front man Rome Ramirez prior to joining the band. This track is a prime example of what Rome brings to the table and shows that even though he is young he still has a remarkable amount of talent and musical maturity. “Lovers Rock” is the track that comes next and is my personal favorite as it has an old school pulse made of a down low bass line and upbeat keys with a new school twist using effects and synthesizers. Track 5, “Murdera”, is the next major hit of this debut album due to its catchy chorus and well put together lyrics. The first thing that stands out to me is Rome’s vocal abilities as he starts out the song singing the catchy chorus but then  progresses into the first verse where he sings/raps a series of well put together lyrics that coincide perfectly with the beat. The song then begins to transform into dub until it eventually fades away. The beat is then picked up by the next two fast paced tracks, “My World” and “Paper Cuts” and is then slowed down for “PCH”.  Pacific Coast Highway is approximately the half way point of the album and buy now you would think that you now have a feel for the album but you’re in for a big surprise as the second half takes on a more of a slower feel. “PCH” and “Same Old Situation” are both acoustic songs in which Rome is normally associated with and contain lyrics discussing about being in an emotionally distraught relationship. The next track that catches my attention is “Spun” as it features splendid guitar effects and transitions but then takes on a kind of 90’s love song that I feel doesn’t fit the song. The album finishes off with the track “Can You Feel It” which features rap super star Wiz Khalifa who adds his own flavor to make this song a one of a kind. The chorus of this song features an effect on Rome’s voice and does what Rome was aiming for, making you feel as if you were floating on a cloud. Rome continues on and adds a reggae flavor to the song which is then transitioned flawlessly into a hip hop atmosphere for Wiz Khalifa’s verse which starts off a bit sluggish but then ends with Khalifa spitting straight fire.

Yours Truly is an album that is wonderfully put together as each song is perfectly placed to make the album like a roller coaster ride for your ears taking the beat up and down. However I feel that tracks 7-10 are very similar lyrically and emotionally. Overall the album is outstanding as Sublime with Rome did everything perfect musically and is a prime example of what talent this group has for the future. Even though it is only half way through the year and the critics are going to hate, I am going to go ahead and say that this is going to be one of the top 5 best albums of 2011 and is an absolute must have for any kind of fan of reggae music.

http://www.sublimewithrome.com
Tagged under
Login to post comments
back to top