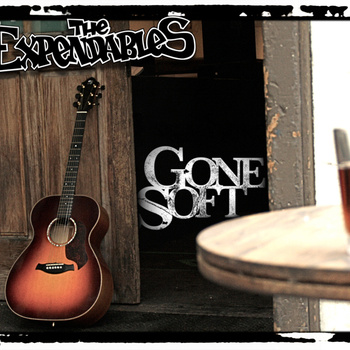 For those ready for a summer album to increase the fun and create the atmosphere, have no qualms about The Expendables new release, Gone Soft, being that soundtrack. Far from soft, the album is a trip of relatable emotions and laid-back acoustic sounds that make Gone Soft more than just a good time.

The opening tracks welcome the listener with a familiar Expendables sound. Perhaps the most reggae tone of the album, “24-7” provides a bright feel and talks about the type of fun one would expect from the band. “Bowl for Two” follows suit by using a 420 metaphor for being up in the air with someone. However, the tuned down acoustic guitar, a very blues quality, sets the more serious tone of themes explored in the album.

Perhaps driven by life changing experiences, Expendables’ album hits heavy with themes of death and depression. In that haunting tuned-down-guitar sound, “Die for You” is a song that contemplates the depths of friendships, “…you know I’d die for you/and I know you’d do the same…” The string arrangements add a background that looms throughout this well arranged track.

Other songs such as “Minimum Wage” and “One More Night” reflect upon similar themes of depression either by speaking of suicidal thoughts in a mundane, low-pay life or realizing ones mortality. These mature ideas are most felt in “One Drop.” While it explores the unavoidable connections between alcohol and musicians, the song shows the contemplative side Expendables are hitting at in this album; those inevitable obstacles of life that comes with making decisions.

The album does find a way to balance the darker themes with optimistic songs such as “Positive Mind.” The song brings in palm-muted guitar tones in a track that speaks about the consumerism that offers a false peace of mind. Similarly, “Corporate Cafeteria” utilizes the cafeteria image of being served the corporate ways of life. Expendables use a protest-like lyric, “…I try and try to fast all day…,” to remind the listener of finding serenity when served over-priced negativity.

Expendables also experiment with different rhythms throughout Gone Soft. Most songs stay away from a straight up set rhythm and drummer set up. “Ryan’s Song” uses a subtle reggae beat with soft brush strokes on the snare. “Corporate Cafeteria” uses a mellow bossa-nova tempo for the track while other songs vary in the choice for drumming with certain songs being void of any percussion.

And while the album steps away from an electric feel that most fans might miss, Gone Soft provides the listener with a moving eclectic sound. “Let Loose” uses ukuleles and violins in a track about faith that culminates with a banjo, making the song like an epic folk tale. The album comes to an end with “War Cry,” an instrumental track with dueling guitars that will make any guitar buff reach for his/her axe.

Gone Soft delivers a great sound that will become a relaxed soundtrack for summer 2012. So get the bon-fires ready and the acoustic guitars tuned up, and set Gone Soft on repeat. Most of all, be sure to let “the glow light of the bonfire sight warm souls and out-stretched fingers.”

http://www.theexpendables.net
Last modified on Wednesday, 30 May 2012 21:57
Tagged under
back to top